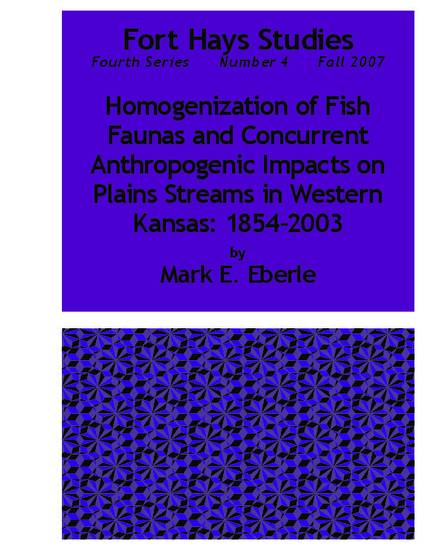 The fish faunas of the Kansas and Arkansas river basins in western Kansas were signifi cantly dissimilar at the time the Kansas Territory was established in 1854. The faunas were no longer dissimilar 150 years later. This homogenization of the faunas resulted primarily from extirpations, although additions of nonnative species, which now constitute 40% of extant faunas, also contributed. Two periods of changes in the faunas were associated with concurrent anthropogenic changes to the landscape that altered stream habitats. Early extirpations of native species (prior to 1920) occurred in clear, perennial creeks and were concurrent with rapid increases in human population and row-crop agriculture associated with increased demands on perennial water sources and increased sediment yields in streams. Late extirpations of native species and widespread additions of nonnative species (after 1960) occurred in formerly large, often turbid rivers with seasonally variable fl ows and were concurrent with increases in groundwater mining and construction of impoundments associated with dewatered stream segments, stabilized fl ows in other stream segments, reduced peak fl ows in all rivers during summer, increased lentic habitat, and reduced turbidity.