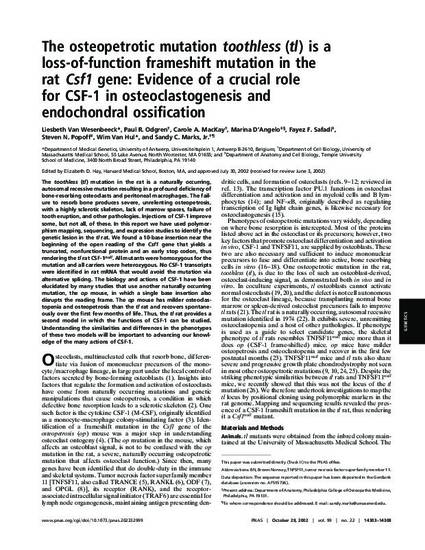 Article
The osteopetrotic mutation toothless (tl) is a loss-of-function frameshift mutation in the rat Csf1 gene: Evidence of a crucial role for CSF-1 in osteoclastogenesis and endochondral ossification
Proceedings of the National Academy of Sciences of the United States of America
Download
Document Type
Article
Publication Date
Disciplines
Abstract
The toothless (tl) mutation in the rat is a naturally occurring, autosomal recessive mutation resulting in a profound deficiency of bone-resorbing osteoclasts and peritoneal macrophages. The failure to resorb bone produces severe, unrelenting osteopetrosis, with a highly sclerotic skeleton, lack of marrow spaces, failure of tooth eruption, and other pathologies. Injections of CSF-1 improve some, but not all, of these. In this report we have used polymorphism mapping, sequencing, and expression studies to identify the genetic lesion in the tl rat. We found a 10-base insertion near the beginning of the open reading of the Csf1 gene that yields a truncated, nonfunctional protein and an early stop codon, thus rendering the tl rat CSF-1null. All mutants were homozygous for the mutation and all carriers were heterozygous. No CSF-1 transcripts were identified in rat mRNA that would avoid the mutation via alternative splicing. The biology and actions of CSF-1 have been elucidated by many studies that use another naturally occurring mutation, the op mouse, in which a single base insertion also disrupts the reading frame. The op mouse has milder osteoclastopenia and osteopetrosis than the tl rat and recovers spontaneously over the first few months of life. Thus, the tl rat provides a second model in which the functions of CSF-1 can be studied. Understanding the similarities and differences in the phenotypes of these two models will be important to advancing our knowledge of the many actions of CSF-1.
Comments

This article was published in Proceedings of the National Academy of Sciences of the United States of America, Volume 99, Issue 22, Pages 14303-14308.