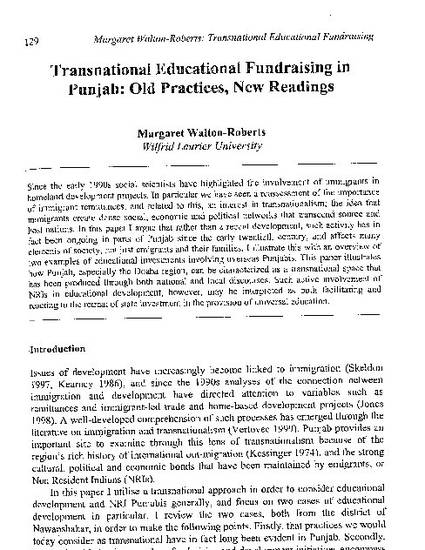 Since the early 1990s social scientists have highlighted the involvement of immigrants in homeland development projects. In particular we have seen a reassessment of the importance of immigrant remittances, and related to this, an interest in transnationalism; the idea that immigrants create dense social, economic and political networks that transcend source and host nations. In this paper I argue that rather than a recent development, such activity has in fact been ongoing in parts of Punjab since the early twentieth century, and affects many elements of society, not just emigrants and their families. I illustrate this with an overview of how Punjab, especially the Doaba region, can be characterized as a transnational space that has been produced through both national and local discourses. Such active involvement of NRIs in educational development, however, may be interpreted as both facilitating and reacting to the retreat of state investment in the provision of universal education.

This article was originally published in Journal of Punjab Studies, 12(1): 129-152. Reproduced with permission.