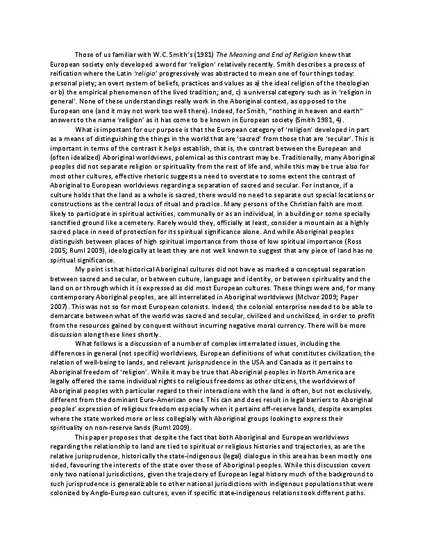 Article
Are they like us, yet? Some thoughts on why religious freedom remains elusive for Aboriginals in North America
The International Indigenous Policy Journal
Disciplines
Abstract

It is well-documented that European culture differs from that of Aboriginal culture. Perhaps one of the most striking differences is in the relationships and attitudes each group has towards land. For Europeans the land is a commemorative gift of the creator there to be exploited for economic benefit; for Aboriginal peoples, the land is also a gift but one that a continuing extension of the creator’s immanence in which all things are related to one another. The one is an economic relation, the other a spiritual relation that denotes family. When two very different cultural systems encounter one another, there are bound to be clashes. Regardless, it is the overriding interests of the state that take precedence in countries where religious freedoms are constitutionally guaranteed – but such guarantees apply only insofar as the religions seeking freedom mirrors that of the dominate society. This paper explores these differences in relationships to land and how Aboriginal religious freedom suffers as a result, which has significant impacts on well-being and cultural continuity.

Acknowledgments
Disclaimer The opinions expressed in this paper are solely those of the author. They do not necessarily reflect the views or policies of neither the Department of Aboriginal Affairs and Northern Development Canada nor the Government of Canada nor any of its agencies. Some commentators may wish to point out that the idea of vestigial states is pejorative. Indeed it is and it is used here, by me at least, as such and on purpose: It reflects how dominant societies usually look down upon their subaltern others. Tonya Gonnella Frichner (2010) in a recent submission to the permanent forum on Indigenous Issues at the United Nations provides a thorough albeit preliminary exposé of the Doctrine of Discovery as the foundation of violation of the human rights of indigenous peoples. Rooted in two Papal Bulls from the Fifteenth century (Dum diversas and Romanus Pontiex) the Doctrine of Discovery has since been institutionalized in the USA Canada and elsewhere and gave European Christian countries the right of conquest, sovereignty, and dominance over non-Christian peoples, along with their lands, territories and resources. The doctrine assumed that non-baptised individuals were non-human and thus merited no consideration in regard to their rights to hold land and resources. Justice Marshall invoked the Doctrine of Discovery in US Supreme court case Johnston v McIntosh (1823); in Canada Johnston was cited as justification as late as 1984’s Guerin v. the Queen. Ross (2005, 69) writes that Esson, J,A, in the Westar case proposed a general rule derived from the British Columbia Court of Appeals decision in the Meares Island case that “the court should not grant an injunction if the economic consequences of doing so would have a serious impact upon the economic health of the province, the region of the logging company.” He further proposed as an exception, also derived from the same cased, that the court could nonetheless grant an injunction with regard to “particular sites which have unique qualities.”
Creative Commons License
Creative Commons Attribution-Noncommercial-No Derivative Works 4.0
Citation Information
Marc V. Fonda. "Are they like us, yet? Some thoughts on why religious freedom remains elusive for Aboriginals in North America"
Available at: http://works.bepress.com/marc_fonda/1/