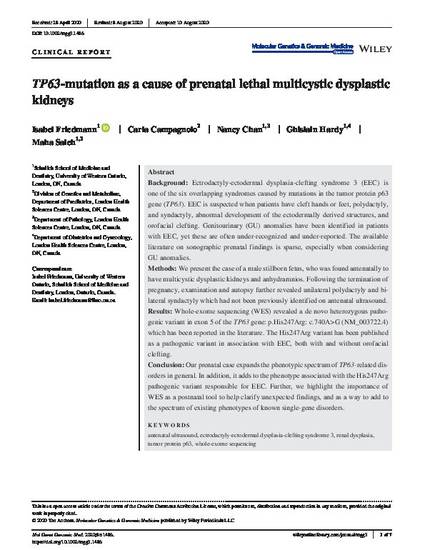 BACKGROUND: Ectrodactyly-ectodermal dysplasia-clefting syndrome 3 (EEC) is one of the six overlapping syndromes caused by mutations in the tumor protein p63 gene (TP63). EEC is suspected when patients have cleft hands or feet, polydactyly, and syndactyly, abnormal development of the ectodermally derived structures, and orofacial clefting. Genitourinary (GU) anomalies have been identified in patients with EEC, yet these are often under-recognized and under-reported. The available literature on sonographic prenatal findings is sparse, especially when considering GU anomalies.

METHODS: We present the case of a male stillborn fetus, who was found antenatally to have multicystic dysplastic kidneys and anhydramnios. Following the termination of pregnancy, examination and autopsy further revealed unilateral polydactyly and bilateral syndactyly which had not been previously identified on antenatal ultrasound.

RESULTS: Whole-exome sequencing (WES) revealed a de novo heterozygous pathogenic variant in exon 5 of the TP63 gene: p.His247Arg: c.740A>G (NM_003722.4) which has been reported in the literature. The His247Arg variant has been published as a pathogenic variant in association with EEC, both with and without orofacial clefting.

CONCLUSION: Our prenatal case expands the phenotypic spectrum of TP63-related disorders in general. In addition, it adds to the phenotype associated with the His247Arg pathogenic variant responsible for EEC. Further, we highlight the importance of WES as a postnatal tool to help clarify unexpected findings, and as a way to add to the spectrum of existing phenotypes of known single-gene disorders.