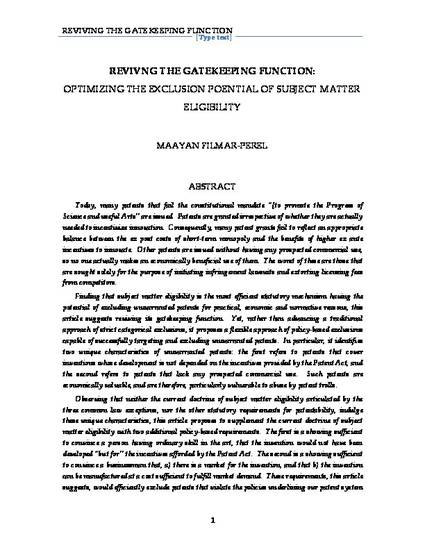 Today, many patents that fail the constitutional mandate “[to promote the Progress of Science and useful Arts” are issued. Patents are granted irrespective of whether they are actually needed to incentivize innovation. Consequently, many patent grants fail to reflect an appropriate balance between the ex post costs of short-term monopoly and the benefits of higher ex ante incentives to innovate. Other patents are issued without having any prospected commercial use, so no one actually makes an economically beneficial use of them. The worst of these are those that are sought solely for the purpose of initiating infringement lawsuits and extorting licensing fees from competitors. Finding that subject matter eligibility is the most efficient statutory mechanism having the potential of excluding unwarranted patents for practical, economic and normative reasons, this article suggests reviving its gatekeeping function. Yet, rather than advancing a traditional approach of strict categorical exclusions, it proposes a flexible approach of policy-based exclusions capable of successfully targeting and excluding unwarranted patents. In particular, it identifies two unique characteristics of unwarranted patents: the first refers to patents that cover inventions whose development is not depended on the incentives provided by the Patent Act, and the second refers to patents that lack any prospected commercial use. Such patents are economically valuable, and are therefore, particularly vulnerable to abuse by patent trolls. Observing that neither the current doctrine of subject matter eligibility articulated by the three common law exceptions, nor the other statutory requirements for patentability, indulge these unique characteristics, this article proposes to supplement the current doctrine of subject matter eligibility with two additional policy-based requirements. The first is a showing sufficient to convince a person having ordinary skill in the art, that the invention would not have been developed “but for” the incentives afforded by the Patent Act. The second is a showing sufficient to convince a businessman that, a) there is a market for the invention, and that b) the invention can be manufactured at a cost sufficient to fulfill market demand. These requirements, this article suggests, would efficiently exclude patents that violate the policies underlining our patent system without falling into the trap of over-exclusiveness or under-exclusiveness associated with per se rules of categorical exclusions.