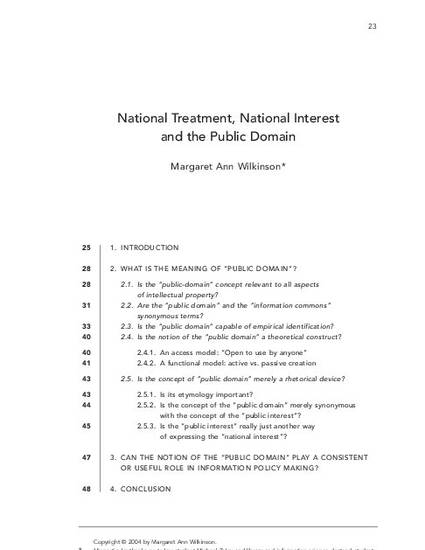 This paper canvassed the literature, seeking a theoretically consistent definition for public domain that was equally applicable across the copyright, trademark and patent spheres. The analysis demonstrated that there is no such construct.

The paper also reviews the findings of those who have tried to empirically demonstrate the ambit of the public domain and illustrates that the problems of definition identified as part of the canvas of theoretical approaches also plague attempts to create a consistent empirical picture. However, these attempts themselves demonstrate, despite the long international commitment to intellectual property, how nationally jurisdictionally bound each description of the public domain is.

Finally, although the public domain concept may be recognized as having value as an explanatory device, given its limited theoretical and descriptive value, one may question its role as rhetoric affecting policy development. Given the etymological roots of the concept of the public domain, in an agrarian-rooted property context, and given the multidimensional complexities of the current information society, the paper concludes that the notion of the public domain can lead to an oversimplification of the environment within which intellectual property devices operate.