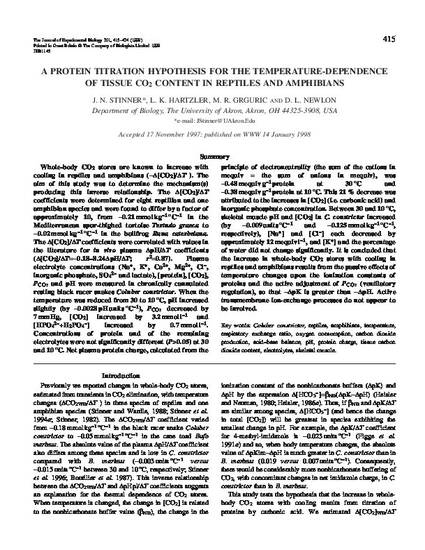 Whole-body CO2 stores are known to increase with cooling in reptiles and amphibians (-Δ[CO2]/ΔT ). The aim of this study was to determine the mechanism(s) producing this inverse relationship. The Δ[CO2]/ΔT coefficients were determined for eight reptilian and one amphibian species and were found to differ by a factor of approximately 10, from -0.21 mmol kg-1 °C-1 in the Mediterranean spur-thighed tortoise Testudo graeca to -0.02 mmol kg-1 °C-1 in the bullfrog Rana catesbeiana. The Δ[CO2]/ΔT coefficients were correlated with values in the literature for in vivo plasma ΔpH/ΔT coefficients (Δ[CO2]/ΔT=-0.18--8.24ΔpH/ΔT; r2=0.87). Plasma electrolyte concentrations (Na+, K+, Ca2+, Mg2+, Cl-, inorganic phosphate, SO42- and lactate), [protein], [CO2], PCO2 and pH were measured in chronically cannulated resting black racer snakes Coluber constrictor. When the temperature was reduced from 30 to 10 °C, pH increased slightly (by -0.0028 pH units °C-1), PCO2 decreased by 7 mmHg, [CO2] increased by 3.2 mmol l-1 and [HPO42-+H2PO4-] increased by 0.7 mmol l-1. Concentrations of protein and of the remaining electrolytes were not significantly different (P>0.05) at 30 and 10 °C. Net plasma protein charge, calculated from the principle of electroneutrality (the sum of the cations in mequiv = the sum of anions in mequiv), was -0.48 mequiv g-1 protein at 30 °C and -0.38 mequiv g-1 protein at 10 °C. This 21 % decrease was attributed to the increases in [CO2] (i.e. carbonic acid) and inorganic phosphate concentration. Between 30 and 10 °C, skeletal muscle pH and [CO2] in C. constrictor increased (by -0.009 units °C-1 and -0.125 mmol kg-1 °C-1, respectively), [Na+] and [Cl-] each decreased by approximately 12 mequiv l-1, and [K+] and the percentage of water did not change significantly. It is concluded that the increase in whole-body CO2 stores with cooling in reptiles and amphibians results from the passive effects of temperature changes upon the ionization constants of proteins and the active adjustment of PCO2 (ventilatory regulation), so that -ΔpK is greater than -ΔpH. Active transmembrane ion-exchange processes do not appear to be involved.