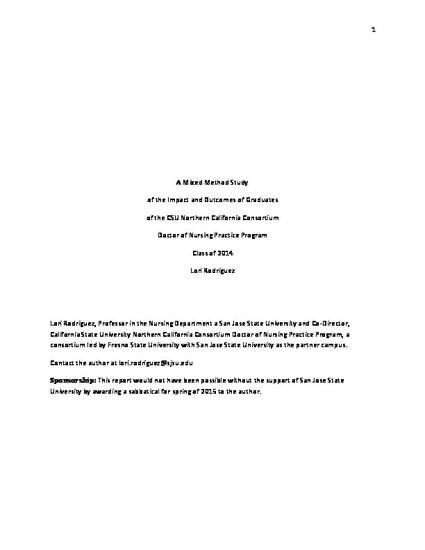 In 2010, in response to a demand for advanced practice nurses to meet the burgeoning needs of the state's population, the California legislature passed AB 867 which called for a pilot project to institute the Doctor of Nursing Practice program in the California State University campus system (Nava & Arambula, 2010). Two programs, one based in Southern California and the other in Northern California, opened in fall of 2012. In Northern California, Fresno State was chosen as the base campus with San Jose State University as the partner campus for the CSU Northern California Consortium of the Doctor of Nursing Practice Program. The goal of this DNP program is to produce leaders and advanced practice nurses to serve in the increasingly complex California health care system as well as produce faculty capable of teaching nursing in colleges and universities.

This report describes the results of a research study undertaken by the Co-Director of the CSU Northern California Consortium of the Doctor of Nursing Practice Program (CSUNCCDNP) program from February 2015 to May 2015 that sought to understand the impact and the outcomes of the program on recent graduates from the Class of May 2014.

This report will present both qualitative information and quantitative data on the impact and outcomes of the class of 2014 of the (CSUNCCDNP) program. Because the program is new in the California State University system, evaluation of the DNP program is critical to curricular and program development, and measuring program success. The California state legislature is requesting specific information that can be collected in survey form regarding where DNP graduates are working, what kinds of positions they are holding, and if their employment has changed since their graduation (Nava & Arambula, 2010).

Citation Information
Lori Rodriguez. "A Mixed Method Study of the Impact and Outcomes of Graduates of the CSU Northern California Consortium Doctor of Nursing Practice Program Class of 2014" (2015)
Available at: http://works.bepress.com/lori_rodriguez/18/