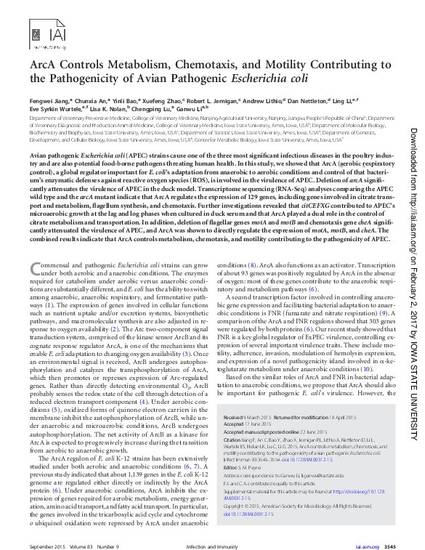 Avian pathogenic Escherichia coli (APEC) strains cause one of the three most significant infectious diseases in the poultry industry and are also potential food-borne pathogens threating human health. In this study, we showed that ArcA (aerobic respiratory control), a global regulator important for E. coli's adaptation from anaerobic to aerobic conditions and control of that bacterium's enzymatic defenses against reactive oxygen species (ROS), is involved in the virulence of APEC. Deletion of arcA significantly attenuates the virulence of APEC in the duck model. Transcriptome sequencing (RNA-Seq) analyses comparing the APEC wild type and the arcA mutant indicate that ArcA regulates the expression of 129 genes, including genes involved in citrate transport and metabolism, flagellum synthesis, and chemotaxis. Further investigations revealed that citCEFXG contributed to APEC's microaerobic growth at the lag and log phases when cultured in duck serum and that ArcA played a dual role in the control of citrate metabolism and transportation. In addition, deletion of flagellar genes motA and motB and chemotaxis gene cheA significantly attenuated the virulence of APEC, and ArcA was shown to directly regulate the expression of motA, motB, and cheA. The combined results indicate that ArcA controls metabolism, chemotaxis, and motility contributing to the pathogenicity of APEC.