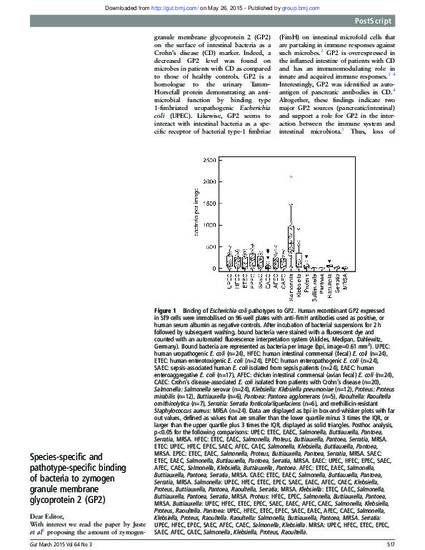 Article
Species-specific and pathotype-specific binding of bacteria to zymogen granule membrane glycoprotein 2 (GP2)
Gut
Download Find in your library
Document Type
Letter to the Editor
Disciplines
Publication Version
Published Version
Publication Date
DOI
10.1136/gutjnl-2014-307854
Abstract
With interest we read the paper by Juste et al 1 proposing the amount of zymogen-granule membrane glycoprotein 2 (GP2) on the surface of intestinal bacteria as a Crohn's disease (CD) marker. Indeed, a decreased GP2 level was found on microbes in patients with CD as compared to those of healthy controls. GP2 is a homologue to the urinary Tamm–Horsefall protein demonstrating an antimicrobial function by binding type 1-fimbriated uropathogenic Escherichia coli (UPEC). Likewise, GP2 seems to interact with intestinal bacteria as a specific receptor of bacterial type-1 fimbriae (FimH) on intestinal microfold cells that are partaking in immune responses against such microbes.2 GP2 is overexpressed in the inflamed intestine of patients with CD and has an immunomodulating role in innate and acquired immune responses.3 ,4Interestingly, GP2 was identified as autoantigen of pancreatic antibodies in CD.4 Altogether, these findings indicate two major GP2 sources (pancreatic/intestinal) and support a role for GP2 in the interaction between the immune system and intestinal microbiota.3 Thus, loss of tolerance to GP2 could play a role in CD's pathophysiology supposed to be exacerbated by preceding intestinal infections. In general, the findings by Juste et al 1 may be explained by a lower pancreatic GP2 secretion, an impaired GP2 binding to bacteria, or by a higher prevalence of bacteria with poor or no GP2 binding in patients with CD.
Comments