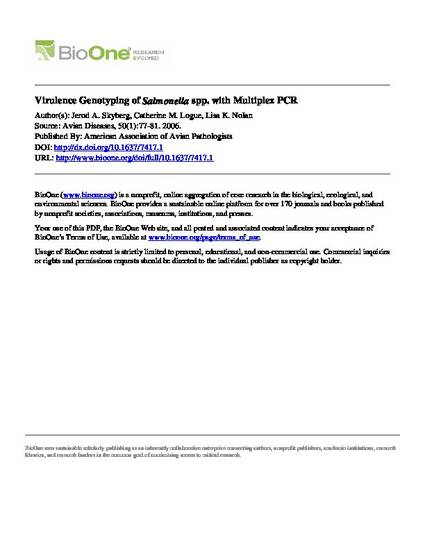 Article
Virulence Genotyping of Salmonella spp. with Multiplex PCR
Avian Diseases
Download Find in your library
Document Type
Article
Disciplines
Publication Date
DOI
10.1637/7417.1
Abstract
The purpose of this study was to develop a multiplex polymerase chain reaction (PCR) protocol useful in the virulence genotyping of Salmonella spp. with the idea that genotyping could augment current Salmonella characterization and typing methods. Seventeen genes associated with Salmonella invasion, fimbrial production, toxin production, iron transport, and intramacrophage survival were targeted by three PCR reactions. Most of these genes are required for full Salmonella virulence in a murine model, and many are also located onSalmonella pathogenicity islands (PAIs) and are associated with type III secretion systems (TTSSs). Once the success of procedures that used positive and negative control strains was verified, the genotypes of 78 Salmonella isolates incriminated in avian salmonellosis (primarily from sick, commercially reared chickens and turkeys) and 80 Salmonella isolates from apparently healthy chickens or turkeys were compared. Eleven of the 17 genes tested (invA, orgA, prgH, tolC, spaN [invJ], sipB, sitC, pagC, msgA, spiA, and iroN) were found in all of the isolates. Another (sopB) was present in all isolates from sick birds and all but one isolate from healthy birds. The remaining five genes (lpfC, cdtB, sifA, pefA, and spvB) were found in 10%–90% of the isolates from sick birds and 3.75%–90% of the healthy birds. No significant differences in the occurrence of these genes between the two groups of isolates were detected. These results suggest that these virulence genes, and presumably the PAIs and TTSSs with which they are associated, are widely distributed among Salmonella isolates of birds, regardless of whether their hosts of origin have been identified as having salmonellosis.
Comments