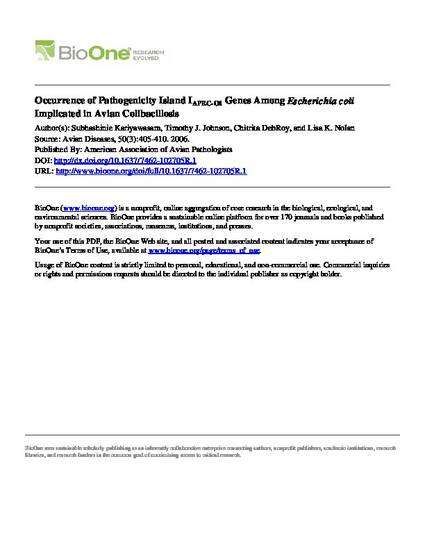 Article
Occurrence of Pathogenicity Island IAPEC-O1 Genes Among Escherichia coli Implicated in Avian Colibacillosis
Avian Diseases
Download Find in your library
Document Type
Article
Disciplines
Publication Date
DOI
10.1637/7462-102705R.1
Abstract
Colibacillosis caused by avian pathogenic Escherichia coli (APEC) is a leading cause of economic loss to the poultry industry worldwide. The ability of APEC to cause disease is determined by certain virulence markers, some of which are located on pathogenicity islands (PAIs). We recently described one such PAI in an APEC O1:K1 strain (APEC-O1). This PAI, termed PAI IAPEC-O1, carries the genes of the pap operon, a region similar to the tiainvasion determinant of enterotoxigenic E. coli; ireA, a gene that encodes an iron-responsive element; and a novel 1.5-kb region, ORF 54. Here, the occurrence of six selected loci of PAI IAPEC-O1 (papA, papC, papG, ireA, tia, and ORF 54) among APEC and fecal E. colistrains from apparently healthy chickens (avian commensal E. coli) was determined using polymerase chain reaction (PCR) techniques. None of the commensal E. coli was positive for all six traits, whereas 7.2% of the APEC isolates were positive for all the traits. Although there was no significant difference in the occurrence of ORF 54 among APEC and commensal E. coli, tia, ireA, papC, and papG genes were predominantly present in APEC rather than in avian commensal E. coli. papA was detected in only 6.3% of APEC, perhaps because of the presence of allelic variants of the gene. Additionally, the presence of all six traits was tested with PCR in APEC isolates collected in the 1980s, and these results were compared with those obtained with the APEC isolated in the 1990s. There was no significant difference in the occurrence of tia, ireA, papC, papG, and ORF 54 between APEC isolates collected during the different decades. However, papA was more frequently present in APEC from the 1980s than it was in APEC from the 1990s. Phylogenetic group of an isolate did not correlate with pathogenicity or the presence of PAI traits, except that more APEC of the low-pathogenicity group belonged to the phylogenetic group B1. However, PAI traits occurred more frequently in isolates belonging to the intermediate- and high-pathogenicity groups than in isolates of low pathogenicity.
Comments