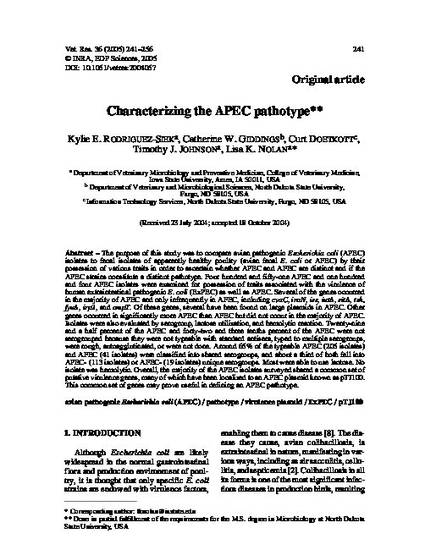 Article
Characterizing the APEC pathotype
Veterinary Research
Download Find in your library
Document Type
Article
Disciplines
Publication Date
DOI
10.1051/vetres:2004057
Abstract
The purpose of this study was to compare avian pathogenic (APEC) isolates to fecal isolates of apparently healthy poultry (avian fecal or AFEC) by their possession of various traits in order to ascertain whether APEC and AFEC are distinct and if the APEC strains constitute a distinct pathotype. Four hundred and fifty-one APEC and one hundred and four AFEC isolates were examined for possession of traits associated with the virulence of human extraintestinal pathogenic (ExPEC) as well as APEC. Several of the genes occurred in the majority of APEC and only infrequently in AFEC, including ,, ,, , , , and. Of these genes, several have been found on large plasmids in APEC. Other genes occurred in significantly more APEC than AFEC but did not occur in the majority of APEC. Isolates were also evaluated by serogroup, lactose utilization, and hemolytic reaction. Twenty-nine and a half percent of the APEC and forty-two and three tenths percent of the AFEC were not serogrouped because they were not typeable with standard antisera, typed to multiple serogroups, were rough, autoagglutinated, or were not done. Around 65% of the typeable APEC (205 isolates) and AFEC (41 isolates) were classified into shared serogroups, and about a third of both fell into APEC- (113 isolates) or AFEC- (19 isolates) unique serogroups. Most were able to use lactose. No isolate was hemolytic. Overall, the majority of the APEC isolates surveyed shared a common set of putative virulence genes, many of which have been localized to an APEC plasmid known as pTJ100. This common set of genes may prove useful in defining an APEC pathotype.
Comments