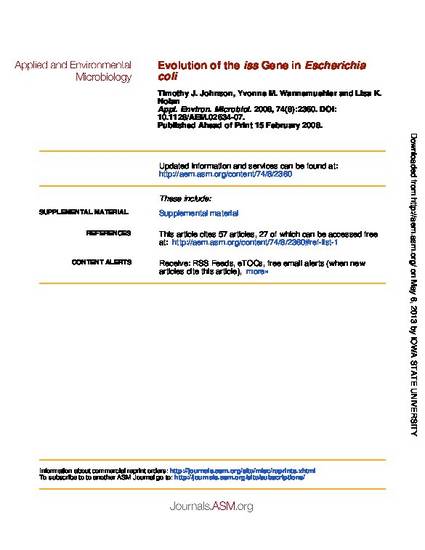 The increased serum survival gene iss has long been recognized for its role in extraintestinal pathogenic Escherichia coli (ExPEC) virulence. iss has been identified as a distinguishing trait of avian ExPEC but not of human ExPEC. This gene has been localized to large virulence plasmids and shares strong similarities with the bor gene from bacteriophage λ. Here, we demonstrate that three alleles of iss occur among E. coli isolates that appear to have evolved from a common λbor precursor. In addition to the occurrence of iss on the ColV/BM virulence plasmids, at least two iss alleles occur within the E. coli chromosome. One of these alleles (designated type 3) was found to occur in the genomes of all currently sequenced ExPEC strains on a similar prophage element that also harbors the Sit iron and manganese transport system. When the prevalence of the three iss types was examined among 487 E. coli isolates, the iss type 3 gene was found to occur at a high frequency among ExPEC isolates, irrespective of the host source. The plasmid-borne iss allele (designated type 1) was highly prevalent among avian pathogenic E. coli and neonatal meningitis-associated E. coliisolates but not among uropathogenic E. coli isolates. This study demonstrates the evolution of iss in E. coli and provides an additional tool for discriminating among E. coli pathotypes through the differentiation of the three iss allele types and bor.