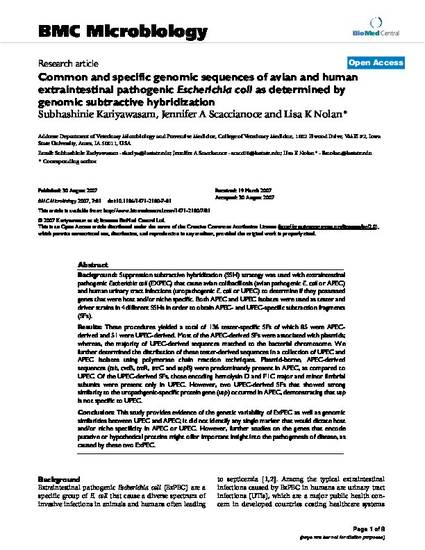 Background: Suppression subtractive hybridization (SSH) strategy was used with extraintestinal pathogenic Escherichia coli (EXPEC) that cause avian colibacillosis (avian pathogenic E. coli or APEC) and human urinary tract infections (uropathogenic E. coli or UPEC) to determine if they possessed genes that were host and/or niche specific. Both APEC and UPEC isolates were used as tester and driver strains in 4 different SSHs in order to obtain APEC- and UPEC-specific subtraction fragments (SFs).

Results: These procedures yielded a total of 136 tester-specific SFs of which 85 were APEC-derived and 51 were UPEC-derived. Most of the APEC-derived SFs were associated with plasmids; whereas, the majority of UPEC-derived sequences matched to the bacterial chromosome. We further determined the distribution of these tester-derived sequences in a collection of UPEC and APEC isolates using polymerase chain reaction techniques. Plasmid-borne, APEC-derived sequences (tsh, cvaB, traR, traC and sopB) were predominantly present in APEC, as compared to UPEC. Of the UPEC-derived SFs, those encoding hemolysin D and F1C major and minor fimbrial subunits were present only in UPEC. However, two UPEC-derived SFs that showed strong similarity to the uropathgenic-specific protein gene (usp) occurred in APEC, demonstrating that usp is not specific to UPEC.

Conclusion: This study provides evidence of the genetic variability of ExPEC as well as genomic similarities between UPEC and APEC; it did not identify any single marker that would dictate host and/or niche specificity in APEC or UPEC. However, further studies on the genes that encode putative or hypothetical proteins might offer important insight into the pathogenesis of disease, as caused by these two ExPEC.