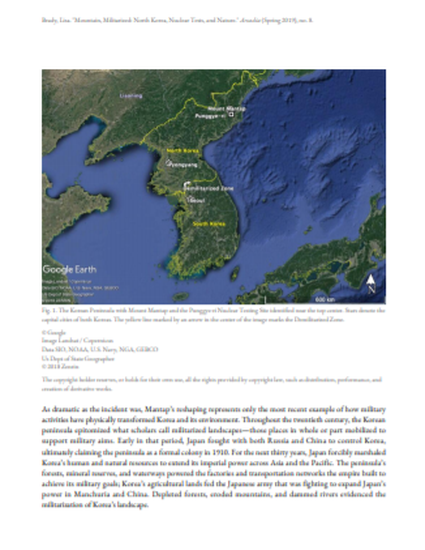 On 3 September 2017, the earth shifted. Seismic activity registering 6.1 on the Richter scale indicated a major geophysical event had taken place, one strong enough to change the shape of mountains. On that day, North Korea exploded a nuclear device at the Punggye-ri Nuclear Test Site inside Mount Mantap (Figure 1). Estimated to be at least 100 kilotonnes, it was the largest nuclear device detonated by North Korea to date (Figure 2). Satellite pictures from before and after the event provide visual evidence of the test’s power to alter the lay of the land (Figures 3 and 4). The most obvious immediate effect was subsidence over 34 hectares of Mantap’s western slope—indicated by the appearance of bare patches in the mountain’s vegetation after the test—and a resulting loss of one to three meters of the peak’s total elevation. Long-term, Mantap may suffer from “tired mountain syndrome,” in which its weakened geological structure could result (and may have already resulted) in the collapse of the test tunnels and in seepage of radioactive material into the air, soil, and water.