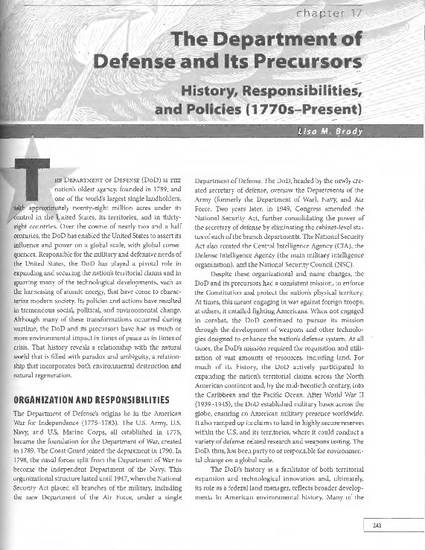 The Department of Defense (DoD) is the nation's oldest agency, founded in 1789, and one of the world's largest single landholders, with approximately twenty-eight million acres under its control in the United States, its territories, and in thirty-eight countries. Over the course of nearly two and a half centuries, the DoD has enabled the United States to assert its influence and power on a global scale, with global consequences. Responsible for the military and defensive needs of the United States, the DoD has played a pivotal role in expanding and securing the nation's territorial claims and in spurring many of the technological developments, such as the harnessing of atomic energy, that have come to characterize modern society. Its policies and actions have resulted in tremendous social, political, and environmental change. Although many of these transformations occurred during wartime, the DoD and its precursors have had as much or more environmental impact in times of peace as in times of crisis. That history reveals a relationship with the natural world that is filled with paradox and ambiguity, a relationship that incorporates both environmental destruction and natural regeneration.