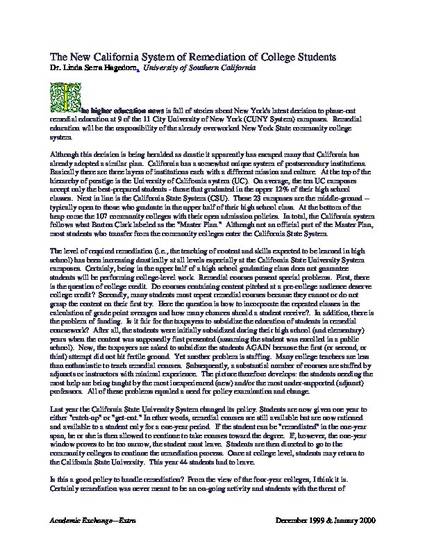 The higher education news is full of stories about New York's latest decision to phase-out remedial education at 9 of the 11 City University of New York (CUNY System) campuses. Remedial education will be the responsibility of the already overworked New York State community college system.

Although this decision is being heralded as drastic it apparently has escaped many that California has already adopted a similar plan. California has a somewhat unique system of postsecondary institutions. Basically there are three layers of institutions each with a different mission and culture. At the top of the hierarchy of prestige is the University of California system (UC). On average, the ten UC campuses accept only the best-prepared students - those that graduated in the upper 12% of their high school classes. Next in line is the California State System (CSU). These 23 campuses are the middle-ground -- typically open to those who graduate in the upper half of their high school class. At the bottom of the heap come the 107 community colleges with their open admission policies. In total, the California system follows what Burton Clark labeled as the "Master Plan." Although not an official part of the Master Plan, most students who transfer from the community colleges enter the California State System.