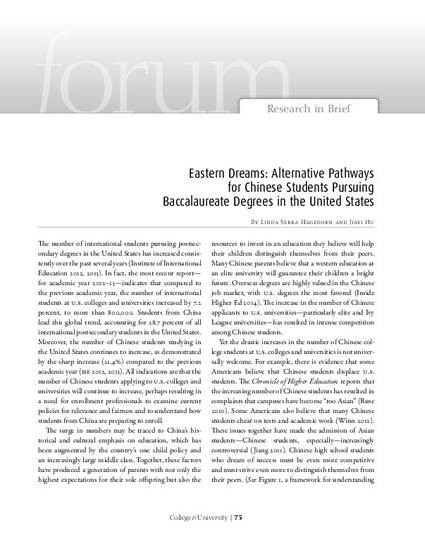 Article
Eastern Dreams: Alternative Pathways for Chinese Students Pursuing Baccalaureate Degrees in the United States
College and University
Download Find in your library
Document Type
Article
Disciplines
Publication Version
Published Version
Publication Date
Abstract
The number of international students pursuing postsecondary degrees in the United States has increased consistently over the past several years (Institute of International Education 2012, 2013). In fact, the most recent report— for academic year 2012–13—indicates that compared to the previous academic year, the number of international students at U.S. colleges and universities increased by 7.2 percent, to more than 800,000. Students from China lead this global trend, accounting for 28.7 percent of all international postsecondary students in the United States. Moreover, the number of Chinese students studying in the United States continues to increase, as demonstrated by the sharp increase (21.4 %) compared to the previous academic year (IIE 2012, 2013). All indications are that the number of Chinese students applying to U.S. colleges and universities will continue to increase, perhaps resulting in a need for enrollment professionals to examine current policies for relevance and fairness and to understand how students from China are preparing to enroll.
Comments