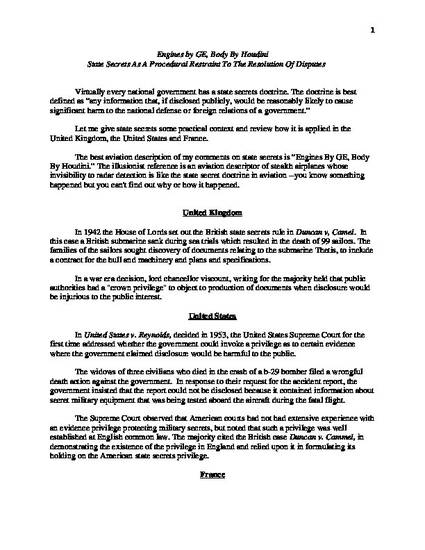 Unpublished Paper
Engines by GE, Body By Houdini: State Secrets As A Procedural Restraint To The Resolution Of Disputes
(2015)
Download
Abstract

Virtually every national government has a state secrets doctrine. The doctrine is best defined as “any information that, if disclosed publicly, would be reasonably likely to cause significant harm to the national defense or foreign relations of a government.”

Let me give state secrets some practical context and review how it is applied in the United Kingdom, the United States and France.

The best aviation description of my comments on state secrets is “Engines By GE, Body By Houdini.” The illusionist reference is an aviation descriptor of stealth airplanes whose invisibility to radar detection is like the state secret doctrine in aviation --you know something happened but you can't find out why or how it happened. United Kingdom

In 1942 the House of Lords set out the British state secrets rule in Duncan v, Camel. In this case a British submarine sank during sea trials which resulted in the death of 99 sailors. The families of the sailors sought discovery of documents relating to the submarine Thetis, to include a contract for the hull and machinery and plans and specifications.

In a war era decision, lord chancellor viscount, writing for the majority held that public authorities had a "crown privilege" to object to production of documents when disclosure would be injurious to the public interest.

The widows of three civilians who died in the crash of a b-29 bomber filed a wrongful death action against the government. In response to their request for the accident report, the government insisted that the report could not be disclosed because it contained information about secret military equipment that was being tested aboard the aircraft during the fatal flight. The Supreme Court observed that American courts had not had extensive experience with an evidence privilege protecting military secrets, but noted that such a privilege was well established at English common law. The majority cited the British case Duncan v. Cammel, in demonstrating the existence of the privilege in England and relied upon it in formulating its holding on the American state secrets privilege.

A contemporary case dealing with state secrets was the dispute between Thales and the Republic of China navy (ROCN), which involved a sales contract of 2.8 billion euro for six Lafayette class frigates. ROCN alleged that payments had been made to intermediaries pursuant to the sale, and ROCN instituted arbitration proceedings seeking reduction of the contract price as well as damages. Ultimately, in May 2010 an arbitration award was made in favor of ROCN.

Thales challenged the award on the ground that it violated due process and international public policy because classified documents had been included in the arbitration file. Thales noted, that although certain documents were eventually withdrawn by the ROCN because information in these documents was classified, the documents nevertheless remained in the file for two years, giving the arbitration panel ample time to obtain direct knowledge of their contents.

The Paris court of appeal, in June 2011, concluded that the arbitral tribunal had based its decision on documents that were not deemed confidential or were obtained from Swiss authorities. The court ruled that no violation of due process or international public policy could have occurred as the arbitrators did not rely on the classified information in making their decision.

Now I will transition from what happened in selected state secrets cases to issues and possible solution for today's arbitrator in a state secrets matter. I will use a hypothetical rocket explosion to illustrate.

An unmanned government rocket explodes seconds after takeoff sending 300 million euro of debris to the earth. CNN reports there was a classified payload being launched. The rocket insurer refuses to pay under the insurance policy since the government has asserted the state secrets doctrine on the accident investigation report.

The rocket manufacturer commences an arbitration against the insurer and there is a tension between the state secrets doctrine and the insurer's ability to defend the claim. Without the accident report the how or why of the rocket explosion are not completely known or understood, and the insurer must deal with the uncertainty or illusion of what happened. There is also a tension for the arbitration panel. Dealing with state secrets is not familiar territory and there are civil and criminal sanctions for violations.

So what guidelines can an arbitration panel look to for guidance? Article 9(2)(f) of the international bar association rules on the taking of evidence in international commercial arbitration (1999) ("IBA Rules") provides that an arbitration tribunal may exclude from evidence or production any document, statement or oral testimony on "grounds of special political or institutional sensitivity (including evidence that has been classified as secret by a government or a public international institution)" that the arbitral tribunal determines to be compelling.

Let’s apply the IBA test to the hypothetical rocket explosion. The arbitration panel could find in a straightforward analysis following Duncan and Reynolds that:

An alternative approach is to be creative, nibble at the edges, and if the facts permit, side-step the state secrets concern.

State secrets information could be redacted from the accident investigation report, thereby removing a procedural constraint to the resolution of the insurance coverage dispute.

Other creative solutions would include:

First, arbitrators and other key people in the case could be granted limited security clearances for purposes of the arbitration.

Second, grant access to sensitive information in a secure location to which only designated persons could have access.

Fourth, it may be possible to craft confidentiality agreements or orders that limit the people who can see certain pieces of evidence.

Fifth, particularly if you are claimant, do a moot arbitration for the case. If state secrets information would be excluded, you need to determine if you can prove your claim.

And the bottom line is that the privacy and procedural flexibility of arbitration arguably makes it particularly well suited to address state secret challenges.

Keywords
Disciplines
Publication Date
Comments
This work is available for publication and adaptation.
Citation Information
Les Schiefelbein. "Engines by GE, Body By Houdini: State Secrets As A Procedural Restraint To The Resolution Of Disputes" (2015)
Available at: http://works.bepress.com/les_schiefelbein/1/