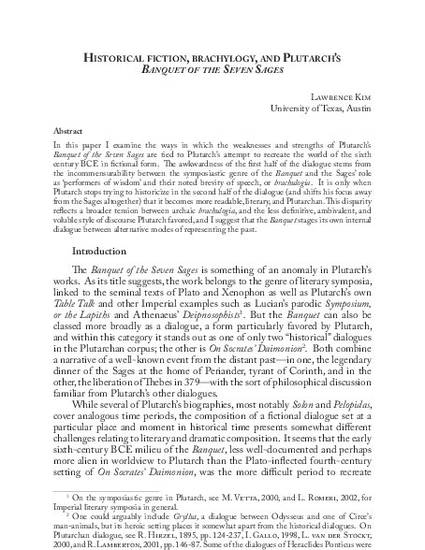 In this paper I examine the ways in which the weaknesses and strengths of Plutarch’s Banquet of the Seven Sages are tied to Plutarch’s attempt to recreate the world of the sixth century BCE in fictional form. The awkwardness of the first half of the dialogue stems from the incommensurability between the symposiastic genre of the Banquet and the Sages’ role as ‘performers of wisdom’ and their noted brevity of speech, or brachulogia. It is only when Plutarch stops trying to historicize in the second half of the dialogue (and shifts his focus away from the Sages altogether) that it becomes more readable, literary, and Plutarchan. This disparity reflects a broader tension between archaic brachulogia, and the less definitive, ambivalent, and voluble style of discourse Plutarch favored, and I suggest that the Banquet stages its own internal dialogue between alternative modes of representing the past.