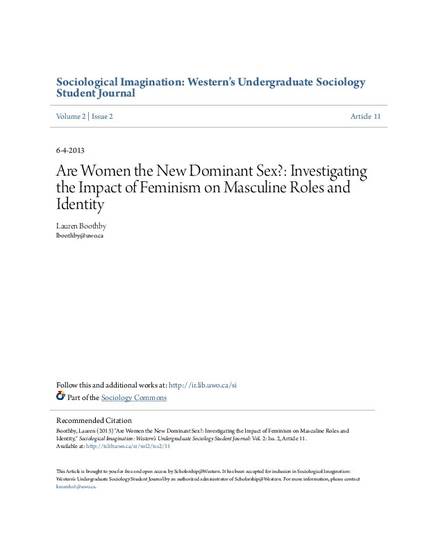 Women are becoming the new dominant sex in Western society. Pursuing feminist equality reform results in a trend toward extremes. The trajectory of women’s rights needs to be examined in light of its effects on men. The present paper examines the decline of patriarchy and progression of matriarchy, as evidenced by female superiority in educational and vocational attainment, degrading representations of men – “the idiot man” – in popular sit-coms, and feminist ideological dominance in political and academic discourse. Normlessness and anomie result from the subversion of masculine roles. Sociological theories – including those of Mead, Goffman, Hochschild, Schutz, Durkheim, Smith, Foucault, Hegel, Baudrillard and Marcuse – are examined and challenged to support the thesis. The author critiques the negative impact feminism has had on men and suggests sociologists make use of positive male contributions in “the usable past,” as suggested to contemporary artists by art critic David Hickey. The pursuit of egalitarian social practices is promoted by the author in place of a prevailing emphasis on what has become the post-patriarchal, gynocentric agenda.