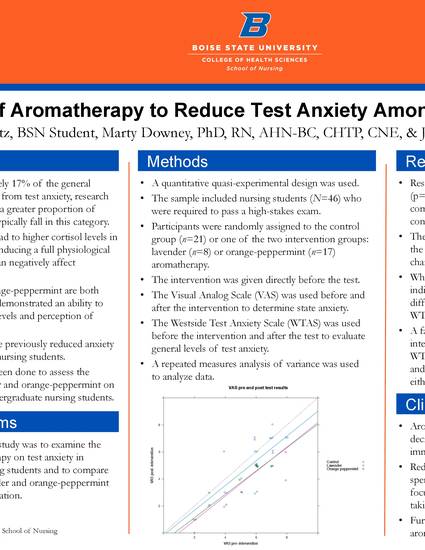 1. Purpose/Aims: The purpose of this study is to examine the effects of aromatherapy on test anxiety in undergraduate nursing students and to compare the efficacy of lavender and orange-peppermint aromas on this population.

2. Rationale/Conceptual Basis/Background: While approximately 17% of the general population suffers from test anxiety, research demonstrates that a greater proportion of nursing students typically fall in this category (Driscoll, Evans, Ramsey, & Wheeler, 2009). Test anxiety can lead to higher cortisol levels in the bloodstream, inducing a full physiological response and negatively affecting performance (Toda & Morimoto, 2011). However, lavender and orange-peppermint are both aromas that have demonstrated an ability to decrease cortisol levels and perception of stress. Lavender has previously been used to reduce anxiety in students at various levels (Kutlu, Yilmaz, & Çeçen, 2008; McCaffrey, Thomas, & Kinzelman, 2009), and other aromas have successfully reduced anxiety in undergraduate nursing students (Johnson, 2014). No research has been done to assess the effects of lavender and orange-peppermint on test anxiety in undergraduate nursing students.

3. Methods: A quantitative experimental design was utilized to evaluate the effects of lavender and orange-peppermint aromas. Undergraduate nursing students are required to pass a high-stakes exam at the beginning of the semester, and participants were randomly assigned to the control group or one of the two intervention groups: lavender or orange-peppermint aromatherapy. The intervention took place directly before the exam. The Visual Analog Scale (VAS) was used before and after the intervention to determine the state anxiety of the student, and the Westside Test Anxiety Scale (WTAS) was used before the intervention and after the test to evaluate general levels of test anxiety. A repeated measures analysis of variance was used to analyze data.

5. Implications: Aromatherapy has the potential to significantly decrease state anxiety in nursing students immediately before an exam. Additionally, this study demonstrates that reduction in anxiety can occur when students spend time to stop what they are doing and focus on something other than studying before taking a test. Further research should investigate other aromas, as well as utilize a larger sample size.