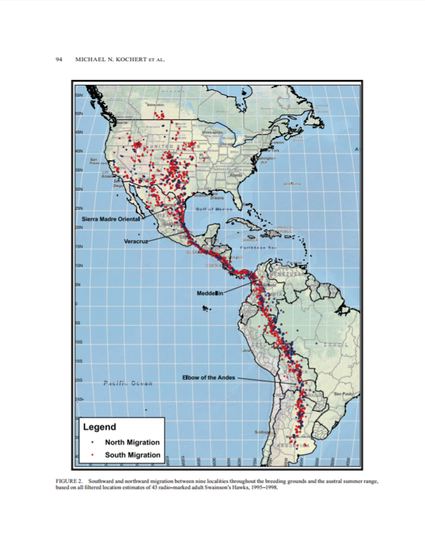 From 1995 to 1998, we tracked movements of adult Swainson’s Hawks (Buteo swainsoni), using satellite telemetry to characterize migration, important stopover areas, and movements in the austral summer. We tagged 46 hawks from July to September on their nesting grounds in seven U.S. states and two Canadian provinces. Swainson’s Hawks followed three basic routes south on a broad front, converged along the east coast of central Mexico, and followed a concentrated corridor to a communal area in central Argentina for the austral summer. North of 20°N, southward and northward tracks differed little for individuals from east of the continental divide but differed greatly (up to 1700 km) for individuals from west of the continental divide. Hawks left the breeding grounds mid-August to mid-October; departure dates did not differ by location, year, or sex. Southbound migration lasted 42 to 98 days, northbound migration 51 to 82 days. Southbound, 36% of the Swainson’s Hawks departed the nesting grounds nearly 3 weeks earlier than the other radio-marked hawks and made stopovers 9.0–26.0 days long in seven separate areas, mainly in the southern Great Plains, southern Arizona and New Mexico, and northcentral Mexico. The birds stayed in their nonbreeding range for 76 to 128 days. All used a core area in central Argentina within 23% of the 738 800-km2 austral summer range, where they frequently moved long distances (up to 1600 km). Conservation of Swainson’s Hawks must be an international effort that considers habitats used during nesting and non-nesting seasons, including migration stopovers.

Published as “Migration Patterns, Use of Stopover Areas, and Austral Summer Movements of Swainson's Hawks”, The Condor, 113(1). © 2011 by the Regents of the University of California. Copying and permissions notice: Authorization to copy this content beyond fair use (as specified in Sections 107 and 108 of the U. S. Copyright Law) for internal or personal use, or the internal or personal use of specific clients, is granted by [the Regents of the University of California for libraries and other users, provided that they are registered with and pay the specified fee via Rightslink® on Caliber (http://caliber.ucpress.net/) or directly with the Copyright Clearance Center, http://www.copyright.com. DOI: 10.1525/cond.2011.090243