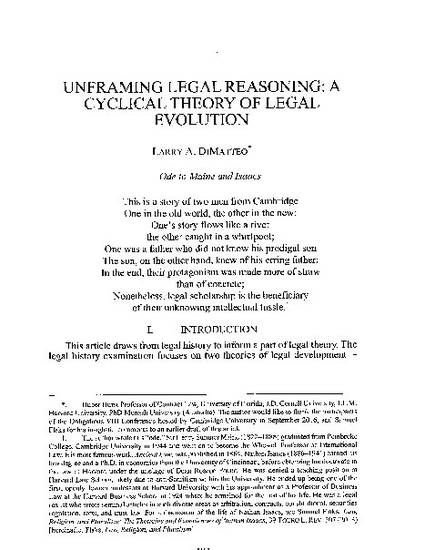 This article draws from legal history to inform a part of legal theory. The legal history examination focuses on two theories of legal development - Henry Sumner Maine's "progression thesis" and Nathan Isaacs's "cycle theory." After examining these two theories of legal development, the analysis shifts to how legal history informs theories of legal reasoning. There are numerous long-standing debates on how "law" should be interpreted. These debates are replicated in the question of how "contracts" should be interpreted. Contract law and contract interpretation will be the focus in examining how history informs legal theory, and more specifically, legal reasoning.

This Article will focus mostly on the legal development of contract law. Roger Cotterrell notes that, "at the most basic level contract is the legal concept which most directly links law and economy because of the significance of the numerous forms of exchange transactions for economic development."'" Based upon this assessment, the development of contract law in the nineteenth to the twenty-first centuries will act as a surrogate of legal development in general and will be used to understand the ebbs and flows of different modes of legal reasoning.

Part II will review theories of development inside and outside the legal academy. This review is premised on two core issues. First, is legal development best characterized by a linear progression (status to contract) or by a cyclical process (status to contract to status)? Second, is this progression gradual due to the nature of the common law or is it subject to periods of rapid change or jumps? Part III provides the framework for Isaacs's cycle theory through the review and recognition of evolutionary patterns in Jewish law. Isaacs's knowledge of Jewish law influenced his view of secular law. Part IV explores the relationship between status and contract law. Part V argues that cycle theory's implications for legal theory is that it falsifies the dichotomies of contract law and many of the pseudo-debates found throughout twentieth century legal scholarship. This approach is based upon three core tenets: (1) contract law is dynamic in nature; (2) contract law's complexity provides ample space for different theories, models, and norms; and (3) because of the first two tenets, the dichotomies debated in legal scholarship are false. In the end, these tenets demonstrate that law is not a pure creation of induction, but takes inductive input and uses historical principles to guide legal change. It concludes with the proposition that legal development can best be understood as progressive-cyclical in nature; that is, despite the cyclical nature of legal change, law remains progressive as its cyclical movements act like a bicycle's wheel moving the rider forward.