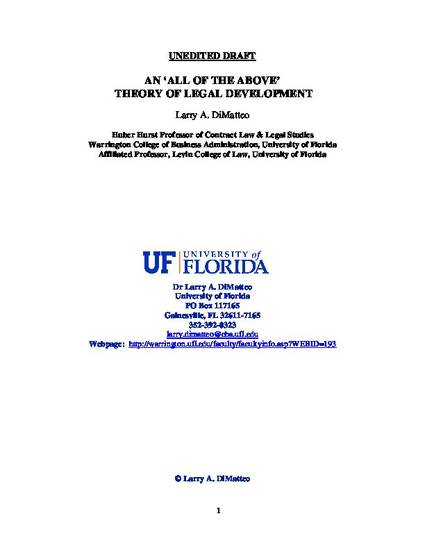 The paper provides a brief background of Nathan Isaacs, his work, and his theory of legal development. Invariably, when analyzing Isaacs’ claim that history proves that law developments in cycles (status to contract to status) the role of Jewish legal history in the development of his thought will play an important role in understanding his theory. Isaacs’ was that rare scholar knowledgeable in the common law, as well as, civil law. A pragmatic realist, as well as a devote Jew. He was a legal historian and very much a man of the present. He possessed a Ph.D. in Economics, and S.J.D. from Harvard under the tutelage of Dean Roscoe Pound. He was a Realist that was critical of the common law of the time, as well as, a firm believer in the ability of the common law to serve the needs of society.

Isaacs was a prolific secular scholar active from 1914 to 1940, as well as, a productive writer of Jewish literature. He was a visionary in many areas of law. He was the first to use the term standard form contracts in his 1917 article The Standardizing of Contract; he developed the now famous competing views of the role of the arbitrator—as agent versus as judge. He recognized the flexibility of the agency and trust concepts, and their future expansion in law. This came to pass with the development of fiduciary duty law. He forcefully argued that industrial society required tort law to recognize areas of strict liability. This came to pass with the adoption of strict product liability. Although, mostly forgotten, and residing deep in the shadows of Karl Llewellyn and Jerome Frank, Isaacs’ was a visionary who is still cited to the present in numerous areas of the law.

This paper will review a number of theories of legal development with a focus upon Henry Sumner Maine’s progression thesis and Nathan Isaacs’ cycle theory. Contract law will provide the area to be tested by the different theories of legal development. Other theories to be discussed include: evolutionary efficiency, evolutionary biology, and Kuhnian theory. In the end, the paper advances a theory of cyclical progression. At the center of this theory is Isaacs’ belief in a principle-based evolution of a living, dynamic law. An offshoot of this theory is the recognition that the dichotomies of contract law are false dichotomies. A theory of “all of the above” accepts that elements of both sides of the dichotomies has always and will always exist in contract. Contract law is formalistic and realistic; literal and contextual; facilitative and restrictive; represented by both standards and rules; and is both freedom and status-based. Finally, contract law, and law generally, is both cyclical and progressive.

Keywords
Disciplines
Publication Date
Citation Information
Larry A DiMatteo. "An 'All of the Above' Theory of Legal Development (Revised)" TBD (2012)
Available at: http://works.bepress.com/larry_dimatteo/10/