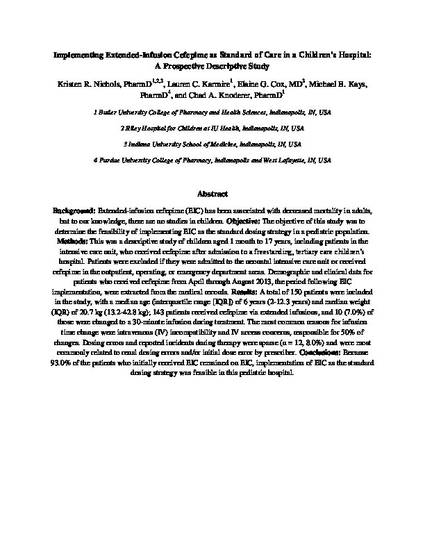 Article
Implementing Extended-Infusion Cefepime as Standard of Care in a Children’s Hospital: A Prospective Descriptive Study
Annals of Pharmacotherapy
Download Find in your library
Document Type
Article
Publication Date
Disciplines
DOI
http://dx.doi.org/10.1177/1060028014566447
Abstract
Background: Extended-infusion cefepime (EIC) has been associated with decreased mortality in adults, but to our knowledge, there are no studies in children. Objective: The objective of this study was to determine the feasibility of implementing EIC as the standard dosing strategy in a pediatric population. Methods: This was a descriptive study of children aged 1 month to 17 years, including patients in the intensive care unit, who received cefepime after admission to a freestanding, tertiary care children’s hospital. Patients were excluded if they were admitted to the neonatal intensive care unit or received cefepime in the outpatient, operating, or emergency department areas. Demographic and clinical data for patients who received cefepime from April through August 2013, the period following EIC implementation, were extracted from the medical records. Results: A total of 150 patients were included in the study, with a median age (interquartile range [IQR]) of 6 years (2-12.3 years) and median weight (IQR) of 20.7 kg (13.2-42.8 kg); 143 patients received cefepime via extended infusions, and 10 (7.0%) of those were changed to a 30-minute infusion during treatment. The most common reasons for infusion time change were intravenous (IV) incompatibility and IV access concerns, responsible for 50% of changes. Dosing errors and reported incidents during therapy were sparse (n = 12, 8.0%) and were most commonly related to renal dosing errors and/or initial dose error by prescriber. Conclusions: Because 93.0% of the patients who initially received EIC remained on EIC, implementation of EIC as the standard dosing strategy was feasible in this pediatric hospital.
Rights