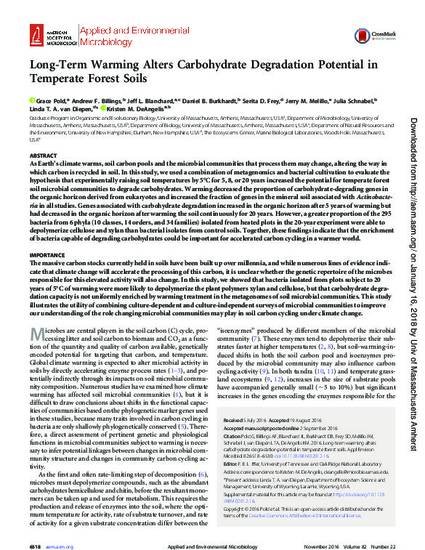 As Earth's climate warms, soil carbon pools and the microbial communities that process them may change, altering the way in which carbon is recycled in soil. In this study, we used a combination of metagenomics and bacterial cultivation to evaluate the hypothesis that experimentally raising soil temperatures by 5°C for 5, 8, or 20 years increased the potential for temperate forest soil microbial communities to degrade carbohydrates. Warming decreased the proportion of carbohydrate-degrading genes in the organic horizon derived from eukaryotes and increased the fraction of genes in the mineral soil associated with Actinobacteria in all studies. Genes associated with carbohydrate degradation increased in the organic horizon after 5 years of warming but had decreased in the organic horizon after warming the soil continuously for 20 years. However, a greater proportion of the 295 bacteria from 6 phyla (10 classes, 14 orders, and 34 families) isolated from heated plots in the 20-year experiment were able to depolymerize cellulose and xylan than bacterial isolates from control soils. Together, these findings indicate that the enrichment of bacteria capable of degrading carbohydrates could be important for accelerated carbon cycling in a warmer world.