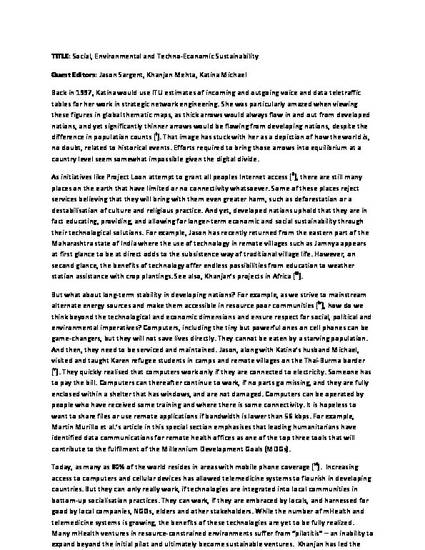 But what about long-term stability in developing nations? For example, as we strive to mainstream alternate energy sources and make them accessible in resource poor communities [ ], how do we think beyond the technological and economic dimensions and ensure respect for social, political and environmental imperatives? Computers, including the tiny but powerful ones on cell phones can be game-changers, but they will not save lives directly. They cannot be eaten by a starving population. And then, they need to be serviced and maintained. Jason, along with Katina’s husband Michael, visited and taught Karen refugee students in camps and remote villages on the Thai-Burma border [ ]. They quickly realised that computers work only if they are connected to electricity. Someone has to pay the bill. Computers can thereafter continue to work, if no parts go missing, and they are fully enclosed within a shelter that has windows, and are not damaged. Computers can be operated by people who have received some training and where there is some connectivity. It is hopeless to want to share files or use remote applications if bandwidth is lower than 56 kbps. For example, Martin Murillo et al.’s article in this special section emphasises that leading humanitarians have identified data communications for remote health offices as one of the top three tools that will contribute to the fulfilment of the Millennium Development Goals (MDGs).