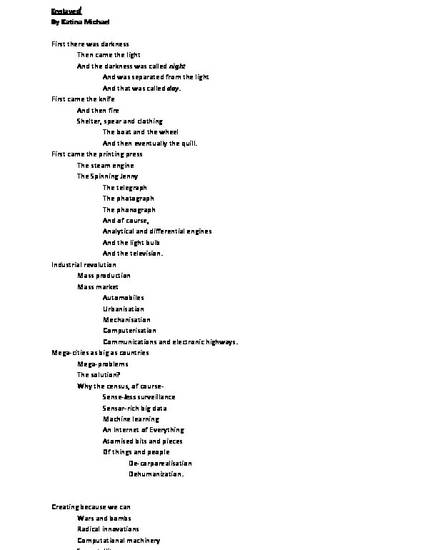 This performance art piece was delivered by Katina Michael at the Intelligence Squared (IQ2) debate at the City Recital Hall, Sydney, Australia. The topic of the debate was “Are we becoming enslaved by our technology?” Joining Katina on the affirmative side was Crikey’s correspondent for politics, media and economics Mr Bernard Keene, and Dimension Data’s general manager of security and internet safety Alastair McGibbon. On the negative side was Peter Singer, Professor of Bioethics at Princeton University, backed by journalist, filmmaker and blogger, Mr Antony Loewenstein, and Ms Asher Wolf, a self-described ‘information activist’. The debate was moderated by Dr Simon Longstaff of the St James Ethics Centre and broadcast on ABC Radio National and ABC Big Ideas television program. The debate is available for viewing in full here: http://www.abc.net.au/tv/bigideas/stories/2014/09/04/4081183.htm The results of the online vote can be found here http://www.iq2oz.com/debates/we-are-becoming-enslaved-by-our-technology-/ As of October 10, 2014, 766 online votes had been received from the general public. 53% of online votes indicate we are becoming enslaved by technology.