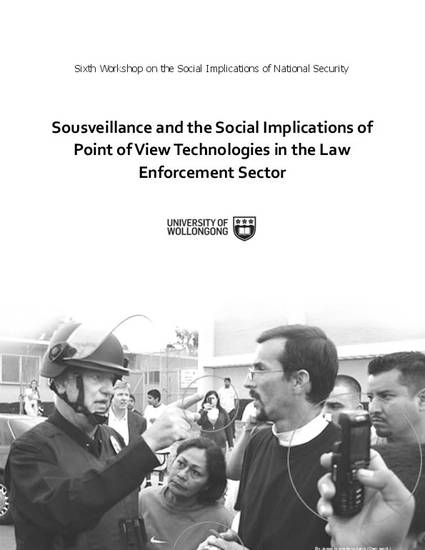 Policing today has become a high-tech affair; especially in the provision of incident event tracking and reporting systems increasingly being used to provide evidence in a court of law. These in-car video (ICV) and body worn recording systems are said to increase convictions and eliminate false claims made by defendants, providing documentary support to police officers and their associated actions in an incident. But today, new technologies such as smart phones equipped with cameras and global positioning system chipsets can also be found in the hands of the everyday citizen, used to capture everyday happenings and distributed to social networks with global reach. It is argued that the traditional notion of community policing has been turned on its head—no longer strictly a strategy followed by police in positions of power in specific neighbourhoods, but a type of policing that has found itself in the hands of the general public. The Vancouver Riots and London Riots of 2011 demonstrated the complexity of the new 3G mobile environment as thousands of images and video were recorded by police, protesters, perpetrators, and innocent bystanders. Telecommunications operators and service providers declared that they would collaborate with local police forces insofar as regulations allowed, and police called on citizens to act as informants to contribute images and video toward law and order. The potential for real-time criminalization based on identity, location and video footage has been discussed as a plausible response by police using crowd-sourced surveillance, and crowd-sourced sousveillance techniques. With the proliferation of covert surveillance technologies the stage is set for a re-evaluation of existing laws and practices.

Keywords
Disciplines
Publication Date
Editor
Katina Michael, M.G. Michael
Publisher Statement
This is a workshop ONLY. In 2012/13 the proceedings will be published in the IEEE Technology and Society Magazine.
Citation Information
Katina Michael and M.G. Michael. Sousveillance and the Social Implications of Point of View Technologies in the Law Enforcement Sector. 6Sydney, NSW, Australia(2012)
Available at: http://works.bepress.com/kmichael/249/