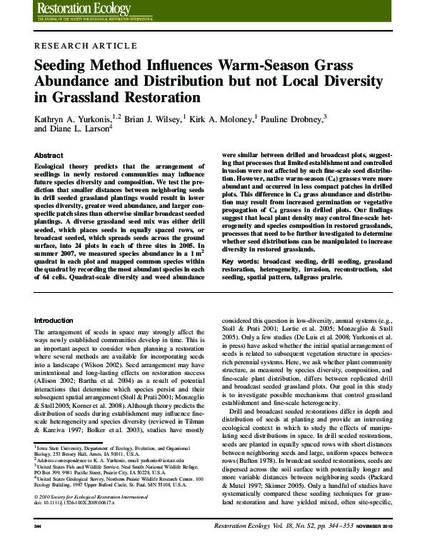 Ecological theory predicts that the arrangement of seedlings in newly restored communities may influence future species diversity and composition. We test the prediction that smaller distances between neighboring seeds in drill seeded grassland plantings would result in lower species diversity, greater weed abundance, and larger conspecific patch sizes than otherwise similar broadcast seeded plantings. A diverse grassland seed mix was either drill seeded, which places seeds in equally spaced rows, or broadcast seeded, which spreads seeds across the ground surface, into 24 plots in each of three sites in 2005. In summer 2007, we measured species abundance in a 1 m2 quadrat in each plot and mapped common species within the quadrat by recording the most abundant species in each of 64 cells. Quadrat-scale diversity and weed abundance were similar between drilled and broadcast plots, suggesting that processes that limited establishment and controlled invasion were not affected by such fine-scale seed distribution. However, native warm-season (C4) grasses were more abundant and occurred in less compact patches in drilled plots. This difference in C4 grass abundance and distribution may result from increased germination or vegetative propagation of C4 grasses in drilled plots. Our findings suggest that local plant density may control fine-scale heterogeneity and species composition in restored grasslands, processes that need to be further investigated to determine whether seed distributions can be manipulated to increase diversity in restored grasslands.