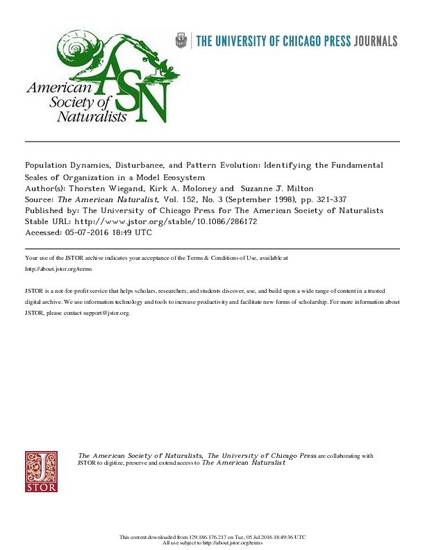 Article
Population Dynamics, Disturbance, and Pattern Evolution: Identifying the Fundamental Scales of Organization in a Model Ecosystem
The American Naturalist
Download Find in your library
Document Type
Article
Disciplines
Publication Version
Published Version
Publication Date
DOI
10.1086/286172
Abstract
We used auto- and cross-correlation analysis and Ripley’s K-function analysis to analyze spatiotemporal pattern evolution in a spatially explicit simulation model of a semiarid shrubland (Karoo, South Africa) and to determine the impact of small-scale disturbances on system dynamics. Without disturbance, local dynamics were driven by a pattern of cyclic succession, where ‘‘colonizer’’ and ‘‘successor’’ species alternately replaced each other. This results in a strong pattern of negative correlation in the temporal distribution of colonizer and successor species. As disturbance rates were increased, the relationship shifted from being negatively correlated in time to being positively correlated—the dynamics became decoupled from the ecologically driven cyclic succession and were increasingly influenced by abiotic factors (e.g., rainfall events). Further analysis of the spatial relationships among colonizer and successor species showed that, without disturbance, periods of attraction and repulsion between colonizer and successor species alternate cyclically at intermediate spatial scales. This was due to the spatial ‘‘memory’’ embedded in the system through the process of cyclic succession. With the addition of disturbance, this pattern breaks down, although there is some indication of increasing ecological organization at broader spatial scales. We suggest that many of the insights that can be gained through spatially explicit models will only be obtained through a direct analysis of the spatial patterns produced.
Comments