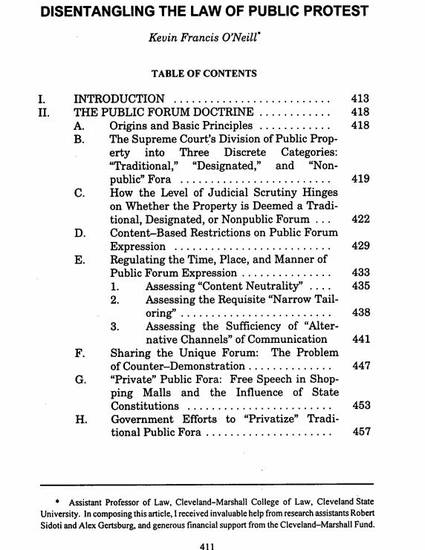 The purpose of this Article is to alleviate the confusion that so frequently surrounds the law of public protest. Much of that confusion can be avoided, when analyzing a given case, by zeroing in on who is regulating the speech in question. There are four regulatory players, who act in four distinct settings: restrictions enacted by legislative bodies, the issuance of permits and fees by government administrators, speech-restrictive injunctions imposed by the judiciary, and the influence of police as a regulatory presence on the street. Discrete lines of precedent attend each of these players. Legislators and judges, for example, are governed by a different legal standard when they impose time, place, or manner restrictions on public protest. Administrators are governed by a special body of precedent when they issue permits for parades or demonstrations. And street-level decisionmaking by police is governed by yet another line of cases. Failure to distinguish among these four regulatory players, and failure to recognize the distinct bodies of precedent that have grown up around each of them, are salient causes for the confusion that so often plagues the law of public protest.