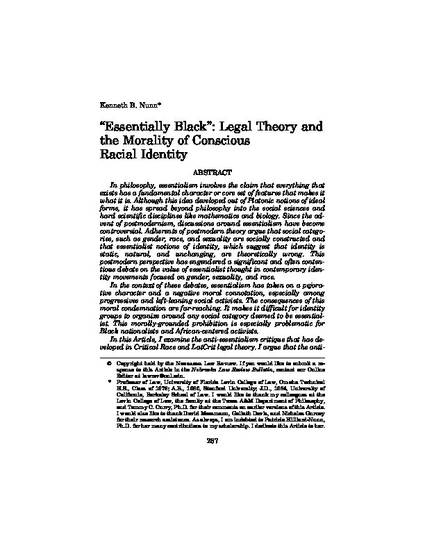 In philosophy, essentialism involves the claim that everything that exists has a fundamental character or core set of features that makes it what it is. Although this idea developed out of Platonic notions of ideal forms, it has spread beyond philosophy into the social sciences and hard scientific disciplines like mathematics and biology. Since the advent of postmodernism, discussions around essentialism have become controversial. Adherents of postmodern theory argue that social categories, such as gender, race, and sexuality are socially constructed and that essentialist notions of identity, which suggest that identity is static, natural, and unchanging, are theoretically wrong. This postmodern perspective has engendered a significant and often contentious debate on the value of essentialist thought in contemporary identity movements focused on gender, sexuality, and race. In the context of these debates, essentialism has taken on a pejorative character and a negative moral connotation, especially among progressives and left-leaning social activists. The consequences of this moral condemnation are far-reaching. It makes it difficult for identity groups to organize around any social category deemed to be essentialist. This morally-grounded prohibition is especially problematic for Black nationalists and African-centered activists.

In this Article, I examine the anti-essentialism critique that has developed in Critical Race and LatCrit legal theory. I argue that the anti-essentialism critique offered by critical theorists is misguided insofar as it claims that the assertion of a conscious racial identity is morally wrong. In reaching this conclusion, I first point out some contradictions and failings in the reasoning underlying the critique. Next, I detail some of the difficulties that adherence to anti-essentialism creates for Black communities and activists. Finally, I link normative approaches to essentialism to culture and worldview. I argue that antiessentialism is Eurocentric and its claim to a universal moral prohibition against race-consciousness is false.