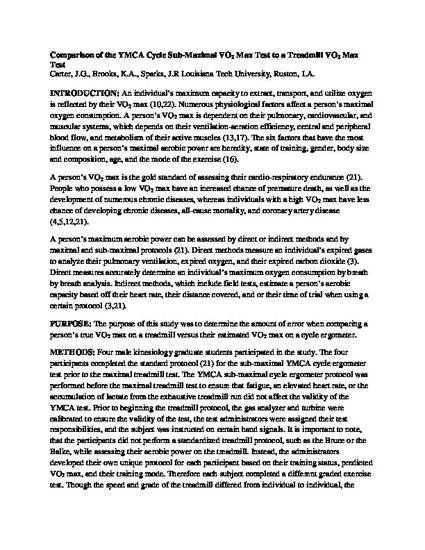 INTRODUCTION: An individual’s maximum capacity to extract, transport, and utilize oxygen is reflected by their VO2 max (10,22). Numerous physiological factors affect a person’s maximal oxygen consumption. A person’s VO2 max is dependent on their pulmonary, cardiovascular, and muscular systems, which depends on their ventilation-aeration efficiency, central and peripheral blood flow, and metabolism of their active muscles (13,17). The six factors that have the most influence on a person’s maximal aerobic power are heredity, state of training, gender, body size and composition, age, and the mode of the exercise (16). A person’s VO2 max is the gold standard of assessing their cardio-respiratory endurance (21). People who possess a low VO2 max have an increased chance of premature death, as well as the development of numerous chronic diseases, whereas individuals with a high VO2 max have less chance of developing chronic diseases, all-cause mortality, and coronary artery disease (4,5,12,21). A person’s maximum aerobic power can be assessed by direct or indirect methods and by maximal and sub-maximal protocols (21). Direct methods measure an individual’s expired gases to analyze their pulmonary ventilation, expired oxygen, and their expired carbon dioxide (3). Direct measures accurately determine an individual’s maximum oxygen consumption by breath by breath analysis. Indirect methods, which include field tests, estimate a person’s aerobic capacity based off their heart rate, their distance covered, and or their time of trial when using a certain protocol (3,21). PURPOSE: The purpose of this study was to determine the amount of error when comparing a person’s true VO2 max on a treadmill versus their estimated VO2 max on a cycle ergometer. METHODS: Four male kinesiology graduate students participated in the study. The four participants completed the standard protocol (21) for the sub-maximal YMCA cycle ergometer test prior to the maximal treadmill test. The YMCA sub-maximal cycle ergometer protocol was performed before the maximal treadmill test to ensure that fatigue, an elevated heart rate, or the accumulation of lactate from the exhaustive treadmill run did not affect the validity of the YMCA test. Prior to beginning the treadmill protocol, the gas analyzer and turbine were calibrated to ensure the validity of the test, the test administrators were assigned their test responsibilities, and the subject was instructed on certain hand signals. It is important to note, that the participants did not perform a standardized treadmill protocol, such as the Bruce or the Balke, while assessing their aerobic power on the treadmill. Instead, the administrators developed their own unique protocol for each participant based on their training status, predicted VO2 max, and their training mode. Therefore each subject completed a different graded exercise test. Though the speed and grade of the treadmill differed from individual to individual, the participants all performed: a 3 minute warm up, 3-4 3 minute work stages, and a 3 minute cool down. RESULTS: The participants’ average results are as follows: age 24.5 ± 1.73 years, weight 83.3 ± 20.8 kilograms, height 182.3 ± 8.13 centimeters, YMCA sub-maximal estimated VO2 max 46.4 ± 8.30 ml/kg/min, and a true maximal treadmill VO2 max of 48.9 ± 5.82 ml/kg/min. Table 1: Individual and Group Results Participant YMCA VO2 True VO2 % Difference Subject 1 48.8 53.1 8.09 Subject 2 39.4 51.1 22.87 Subject 3 57.1 51.1 10.47 Subject 4 40.3 40.3 0.00 Average 46.41 48.91 10.36 SD 8.30 5.82 9.47

DISCUSSION: The four participants had an average of 10.36 ± 9.47 percent difference between the maximal treadmill test and the YMCA submaximal protocol. The YMCA submaximal cycle ergometer test: under-predicted participants 1 and 2’s VO2 max, over-predicted participant 3’s VO2 max, and was 100% accurate in estimating subject 4’s VO2 max. The YMCA protocol under-estimated Subject 1’s VO2 max by 8.09% and Subjects 2’s VO2 max by 22.87%, while Subject 3’s VO2 max was over-estimated by 10.47%. CONCLUSION: The YMCA sub-maximal protocol typically under-predicts an individual’s VO2 max when compared to an exhaustive treadmill protocol. The under-prediction of subject’s VO2 max when comparing a cycle ergometer protocol to a treadmill procedure is to be expected due to the less muscle mass involved in the cycle protocol (3). In addition to the less muscle mass engaged in cycle protocols, the mode of cycling is typically unfamiliar for most participants, leading to a decreased economy for the exercise. Since the YMCA sub-maximal protocol is based off the relationship between oxygen consumption and heart rate, a decreased economy of the participant will result in the under-prediction of the participant’s aerobic capacity. Most individuals will score 5-10% lower on their maximal oxygen consumption when comparing a cycle protocol to a treadmill protocol (19). The exhaustive treadmill protocol, while measuring expired gases, is typically considered the goal standard among exercise physiologist when assessing aerobic power of average subjects due to the fact that subjects typically score their highest VO2 while using this procedure. Though this method typically achieves the highest oxygen consumption among its participants, the protocol is not appropriate for certain populations. Subjects who have chronic diseases, that are risk stratified as moderate or high risk, the elderly, have arthritis, excessively obese, or are sedentary would most likely benefit from a submaximal protocol.