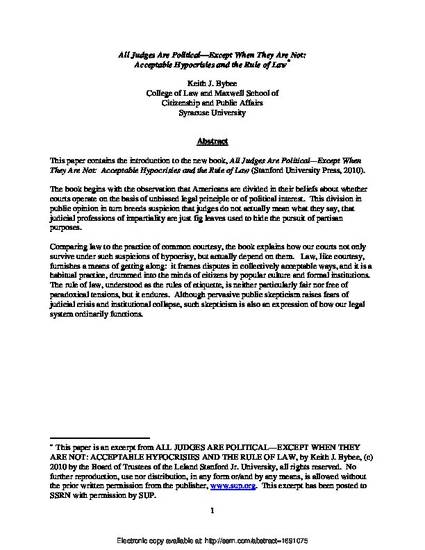 Article
All Judges Are Political—Except When They Are Not: Acceptable Hypocrisies and the Rule of Law
College of Law - Faculty Scholarship
Download
Document Type
Article
Date
Keywords
Language
English
Disciplines
Description/Abstract

This paper contains the introduction to the new book, All Judges Are Political—Except When They Are Not: Acceptable Hypocrisies and the Rule of Law (Stanford University Press, 2010).

The book begins with the observation that Americans are divided in their beliefs about whether courts operate on the basis of unbiased legal principle or of political interest. This division in public opinion in turn breeds suspicion that judges do not actually mean what they say, that judicial professions of impartiality are just fig leaves used to hide the pursuit of partisan purposes.

Comparing law to the practice of common courtesy, the book explains how our courts not only survive under such suspicions of hypocrisy, but actually depend on them. Law, like courtesy, furnishes a means of getting along: it frames disputes in collectively acceptable ways, and it is a habitual practice, drummed into the minds of citizens by popular culture and formal institutions. The rule of law, understood as the rules of etiquette, is neither particularly fair nor free of paradoxical tensions, but it endures. Although pervasive public skepticism raises fears of judicial crisis and institutional collapse, such skepticism is also an expression of how our legal system ordinarily functions.