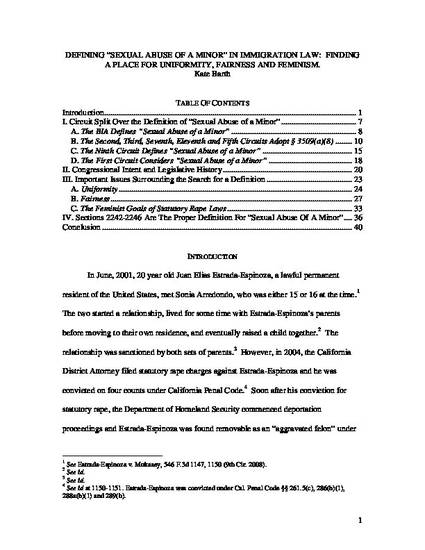 This article examines the circuit split over the proper definition of the term "sexual abuse of a minor" in the Immigration and Nationality Act, using considerations of fairness, uniform application of the law, and feminist perceptions of the purpose of statutory rape laws to help guide analysis. The Board of Immigration Appeals, the Second, Third, Fifth, Seventh, and Eleventh Circuits have tied the term "sexual abuse of a minor" to the definition given in 18 U.S.C § 3509(a)(8). The Ninth Circuit, on the other hand, recently decided that the term should more properly be tied to the definition given in 18 U.S.C.A. §§ 2242-2246. In addition, the First Circuit has refused to tie "sexual abuse of a minor" to a federal definition and has instead indicated that any state conviction for statutory rape constitutes an aggravated felony as intended by the INA. The differences between these possible definitions are striking. Because an alien who is concluded to have been convicted of "sexual abuse of a minor" is deportable as an aggravated felon, the breadth of the definition chosen by the courts has far-reaching consequences on the lives of the aliens it impacts. This article argues that rather than looking to § 3509(a)(8) or fully relying on a state conviction, courts should compare the state statute of conviction with the narrower definition of "sexual abuse of a minor" encoded in substantive federal criminal law at §§ 2242-2246 because this definition is construed in favor of the alien, results in a more uniform application of the law and aligns more closely with feminist perceptions of what a statutory rape law should accomplish.