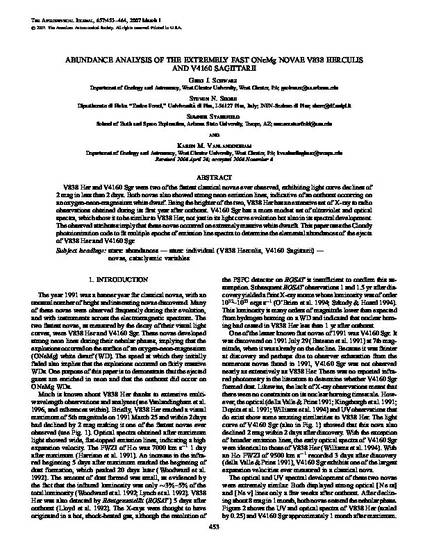 Article
Abundance Analysis of the Extremely Fast ONeMg Novae V838 Herculis and V4160 Sagittarii
Astrophysical Journal
Download Find in your library
Document Type
Article
Publication Date
Disciplines
Abstract
V838 Her and V4160 Sgr were two of the fastest classical novae ever observed, exhibiting light curve declines of 2 mag in less than 2 days. Both novae also showed strong neon emission lines, indicative of an outburst occurring on an oxygen-neon-magnesium white dwarf. Being the brighter of the two, V838 Her has an extensive set of X-ray to radio observations obtained during its first year after outburst. V4160 Sgr has a more modest set of ultraviolet and optical spectra, which show it to be similar to V838 Her, not just in its light curve evolution but also in its spectral development. The observed attributes imply that these novae occurred on extremely massive white dwarfs. This paper uses the Cloudy photoionization code to fit multiple epochs of emission line spectra to determine the elemental abundances of the ejecta of V838 Her and V4160 Sgr.
Publisher
American Astronomical Society
DOI
10.1086/510661
Comments