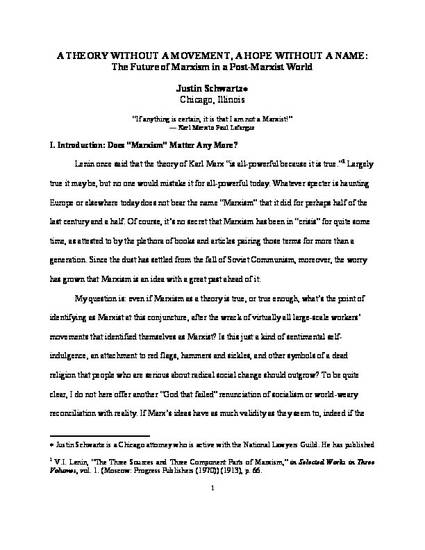 Article
A Theory Without a Movement, a Hope Without a Name: The Future of Marxism in a Post-Marxist World
Working Paper, Unpublished As of Now (2013)
Download
Abstract

Just as Marx's insights into capitalism have been most strikingly vindicated by the rise of neoliberalism and the near-collapse of the world economy, Marxism as social movement has become bereft of support. Is there any point in people who find Marx's analysis useful in clinging to the term "Marxism" - which Marx himself rejected -- at time when self-identified Marxist organizations and societies have collapsed or renounced the identification, and Marxism own working class constituency rejects the term? I set aside bad reasons to give on "Marxism," such as that the theory is purportedly refuted, that its adoption leads necessarily to tyranny and poverty, and the like. I consider the more problematic issue that Marxism came to identify its own success in terms of the success of self-identified Marxist movements, and on those terms appears to have failed. I reject the answers that Marxism has not really been tried or that the timetable was off. But I take seriously the idea that abandoning the term means abandoning the tradition and the commitment to develop the theory. I conclude, inconclusively, that it's not clear whether the term "Marxism" is worth retaining, but argue that if it is worth retaining, it is only in a minimal sense without expectations that current or future countersystemic movements will identify themselves in those familiar terms.

Keywords
Disciplines
Publication Date
Citation Information
Justin Schwartz. "A Theory Without a Movement, a Hope Without a Name: The Future of Marxism in a Post-Marxist World" Working Paper, Unpublished As of Now (2013)
Available at: http://works.bepress.com/justin_schwartz/19/