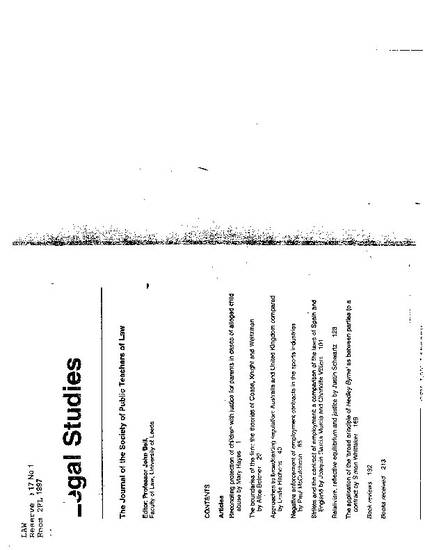 THIS PAPER IS THE CO-WINNER OF THE FRED BERGER PRIZE IN PHILOSOPHY OF LAW FOR THE 1999 AMERICAN PHILOSOPHICAL ASSOCIATION FOR THE BEST PUBLISHED PAPER IN THE PREVIOUS TWO YEARS.

The conflict between liberal legal theory and critical legal studies (CLS) is often framed as a matter of whether there is a theory of justice that the law should embody which all rational people could or must accept. In a divided society, the CLS critique of this view is overwhelming: there is no such justice that can command universal assent. But the liberal critique of CLS, that it degenerates into an unpalatable moral relativism on which there is no non-arbitrary basis between a justice that underwrites forms of domination such as slavery and a justice that condemns such forms of domination is equally powerful and compelling. I show trhat there is a way to harmonize both views that is subject to empirical test.

First I show that the most widely accepted and influential formulation of liberal justice, John Rawls' Justice as Fairness, in. e.g, A Theory of Justice, cannot avoid the relativistic challenge because it would not be accepted, as a matter of sociological fact, by real people in a divided society once the "veil of Ignorance" is removed and real people step out from the Original Position. To put it differently, different reflective equilibria are inevitable in a divided society. Given the weight that Rawls properly puts on the realizability of a conception of justice and its stability in practice, this is a fatal objection. There can be no divided society that is "well ordered" in Rawls' sense, governed by a shared conception of justice and known to be so governed.

I then turn to the most powerful statement of the CLS view, Milton's Fisk's relativistic account in The State and Justice. For Fisk, justice is a compromise between what the dominant groups can compel and what the the subordinate groups will acquiesce to., There is no one such compromise in any given situation, so the account is in that sense relativistic, but more deeply, it is relativistic in that it offers no non-arbitrary, non-question begging way to choose between the official justice of, e.g., a slaveholding society and and the radical justice of the slaves, which has no place for slaveholders as a group or slavery as an institution.All that Fisk can offer is an arbitrary existential choice: I'm with the slaves. (Or the slaveowners.) Most of us would find this disconcerting or even unacceptable.

I show that Fisk's general sort of account can be modified to allow for an non-arbitrary choice. Given general facts about human nature, societies based on domination will produce resistance that over the long run will diminish or eliminate various forms of domination. Through a sort of ratchet effect, rights won will be hard if not impossible to reverse. Societies embodying forms of domination can therefore be compared on dimensions of stability: the more domination, the more resistance, and the less stability. Such societies are inferior on the dimension of justice to more emancipatory society on the terms of both kinds of justice, official and radical.

This is not question begging because regimes of domination incorporate stability no less than more emancipatory social orders. The choice between official justice embodying domination and radical justice that does not is not arbitrary because it is based on a shared commitment to long term stability. This offers an empirical test of which social orders are more justice, and a prediction that over time, domination will tend to decrease.