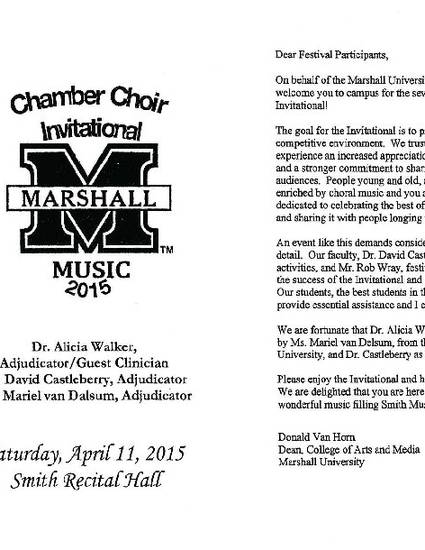 On behalf of the Marshall University community, I want to welcome you to campus for the seventh annual Chamber Choir Invitational!

The goal for the Invitational is to present choral music in a noncompetitive environment. We trust each of you will take from this experience an increased appreciation for the beauty of choral art and a stronger commitment to sharing choral works with diverse audiences. People young and old, and from all walks of life, are enriched by choral music and you are part of an enduring tradition dedicated to celebrating the best of human creation through song and sharing it with people longing to hear inspiring works of art.

An event like this demands considerable planning and attention to detail. Our faculty, Dr. David Castleberry, director of choral activities, and Mr. Rob Wray, festival coordinator, are central to the success of the Invitational and I am grateful for their leadership. Our students, the best students in the world, will perform and provide essential assistance and I extend my thanks to them.

We are fortunate that Dr. Alicia Walker is with us and she is joined by Ms. Mariel van Delsum, from the faculty at West Virginia State University, and Dr. Castleberry as our clinicians.

Please enjoy the Invitational and have a good time on our campus. We are delighted that you are here and we look forward to wonderful music filling Smith Music Building today.

Dean, College of Arts and Media

Alicia W. Walker is Associate Director of Choral Studies at the University of South Carolina, where she directs the University Chorus, the USC Men's Chorus, teaches undergraduate Conducting and Choral Methods, and supervises student teachers. At the graduate level, she teaches courses in Sacred Music, Conducting, and Music Education. She holds degrees from Florida State University (B.M.E.), the Southern Baptist Theological Seminary (M.C.M.), and the University of Georgia (D.M.A.). An experienced music educator, Dr. Walker taught at the elementary, middle, and high school levels in Florida and Georgia prior to joining the music education faculty at the University of Georgia. She was a 2013 Teaching Fellow in USC's Center for Teaching Excellence in the area of Service Learning. Recently, Dr. Walker has taught and conducted in St. Lucia and South Africa.

In addition to her teaching responsibilities, Dr. Walker is a leader in professional music organizations. Currently, she is President-elect of Southern Division ACDA (American Choral Directors Association), having previously served as President of Georgia ACOA, and on several ACDA conference committees. Polyphony, an organization for pastoral musicians, chose Dr. Walker as their first national leadership team coordinator, a position she held through 2011. Other professional memberships include NAfME, SCMEA, GMEA, and NCCO. She maintains an active schedule as a guest conductor, clinician, and adjudicator. A long-time church musician, Dr. Walker served as a committee chair for the 2010 hymnal, Celebrating Grace. She is Director of Music & Arts at Union United Methodist Church in Irmo, SC. Her articles have appeared in "Choral Journal" "Georgia Music News," and ''Review and Expositor.''

David Castleberry, Professor of Music and Director of Choral Activities, has taught at Marshall University since 1990. He directs the select MU Chamber Choir, which has earned acclaim under his direction for its many performances at Charleston, South Carolina's Piccolo Spoleto Festival, and for its award-winning, hour-long television special, Choral Fusion, presented by West Virginia PBS affiliate WPBY. The choir tours regularly and has performed for conventions and meetings of ACDA, MENC, AGO, and many other professional music organizations. During the spring of 2012, the Chamber Choir travelled to France for a ten-day concert tour that featured a performance at Paris's legendary Cathedral of Notre Dame, along with concerts and visits to locations through the southwest of France. A recently released compact disc features performances from the tour.

Dr. Castleberry conducts the West Virginia Symphony Orchestra Chorus and serves as Music Director at Saint John's Episcopal Church in Huntington. He has served as President of the Southern Division of the American Choral Directors Association (ACDA) and twice as President of WVACDA. He has also served as a member of the Editorial Board of Choral journal a monthly publication of ACDA, where he edited the CD Reviews column and contributed many articles and reviews. He is presently at work on a text dealing with the conductor's varied roles in preparation, rehearsal and performance of choral music. Dr. Castleberry is a frequent guest conductor and clinician.

Mariel van Dalsum came to the United States from the tiny country of the Netherlands to pursue a degree in Comparative Literature. After a Bachelors and a Masters degree in French and Latin American poetry, she would not give up on the idea of singing and enrolled in the New England Conservatory of Music in Boston. She studied with Susan Clickner and Helen Hodam before graduating from NEC with a Bachelors and Masters degree in vocal performance. Ms. Van Dalsum has performed in The Marraige of Figaro with opera director Peter Sellers at the Boston Opera. She has performed Louise in The Duenna, Adele in Die Fledermaus, Ms. Wordsworth in Albert Herring all under the direction of John Moriarty. She sang Vespina in Infedelta Delusa at the Academy of the West in Santa Barbara and sang Papagena in the Magic Flute at Opera North. Under the baton of Maestro Grant Cooper, she has sung Maria in West Side Story, Berta in The Barber of Seville, Micaela in Carmen and Barbarina in The Marriage of Figaro. She also sang Josephone in HMS Pinafore at Huntington Theatre in Boston. Ms. Van Dalsum appeared as the Mother in Amahl and the Night Visitors with Seneca Chamber Orchestra multiple times. And she has performed in Seneca's production of The Mikado, HMS Pinafore and The Pirates of Penzance. She has also appeared as Despina in Cosi fan Tutti, and as Musetta in La Bohme.

Ms. Van Dalsum judges multiple singing competitions each year. She was a judge several times for the West Virginia Symphony's Idol competition and repeatedly judges for the WV Christian School Fine Arts Competition. She has taught voice for over 25 years. Her students have been accepted into Boston University's Music School Peabody Conservatory of Music, Chicago School of the Arts, New England Conservatory of Music, and the group Chanticleer.