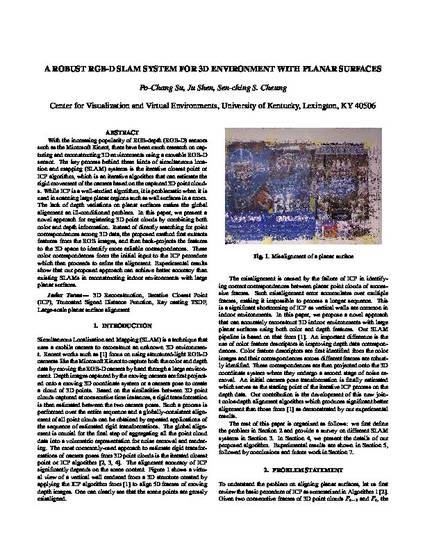 Article
A Robust RGBD Slam System for 3D Environment with Planar Surfaces
IEEE International Conference on Image Processing
Download
Document Type
Conference Paper
Publication Date
Abstract
With the increasing popularity of RGB-depth (RGB-D) sensors such as the Microsoft Kinect, there have been much research on capturing and reconstructing 3D environments using a movable RGB-D sensor. The key process behind these kinds of simultaneous location and mapping (SLAM) systems is the iterative closest point or ICP algorithm, which is an iterative algorithm that can estimate the rigid movement of the camera based on the captured 3D point clouds. While ICP is a well-studied algorithm, it is problematic when it is used in scanning large planar regions such as wall surfaces in a room. The lack of depth variations on planar surfaces makes the global alignment an ill-conditioned problem. In this paper, we present a novel approach for registering 3D point clouds by combining both color and depth information. Instead of directly searching for point correspondences among 3D data, the proposed method first extracts features from the RGB images, and then back-projects the features to the 3D space to identify more reliable correspondences. These color correspondences form the initial input to the ICP procedure which then proceeds to refine the alignment. Experimental results show that our proposed approach can achieve better accuracy than existing SLAMs in reconstructing indoor environments with large planar surfaces.
Inclusive pages
275-279
ISBN/ISSN
978-1-4799-2341-0
Document Version
Postprint
Comments