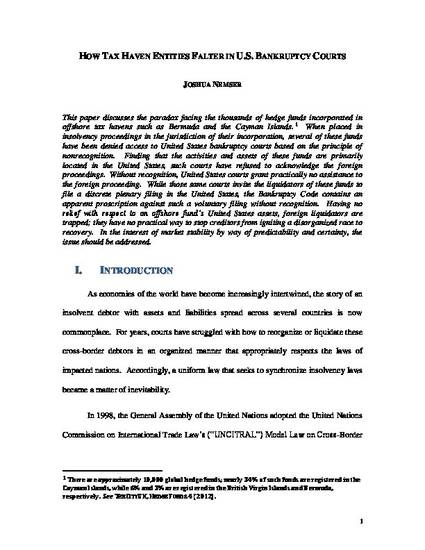 This paper discusses the paradox facing the thousands of hedge funds incorporated in offshore tax havens such as Bermuda and the Cayman Islands. When placed in insolvency proceedings in the jurisdiction of their incorporation, several of these funds have been denied access to United States bankruptcy courts based on the principle of nonrecognition. Finding that the activities and assets of these funds are primarily located in the United States, such courts have refused to acknowledge the foreign proceedings. Without recognition, United States courts grant practically no assistance to the foreign proceeding. While those same courts invite the liquidators of these funds to file a discrete plenary filing in the United States, the Bankruptcy Code contains an apparent proscription against such a voluntary filing without recognition. Having no relief with respect to an offshore fund’s United States assets, foreign liquidators are trapped; they have no practical way to stop creditors from igniting a disorganized race to recovery. In the interest of market stability by way of predictability and certainty, the issue should be addressed.