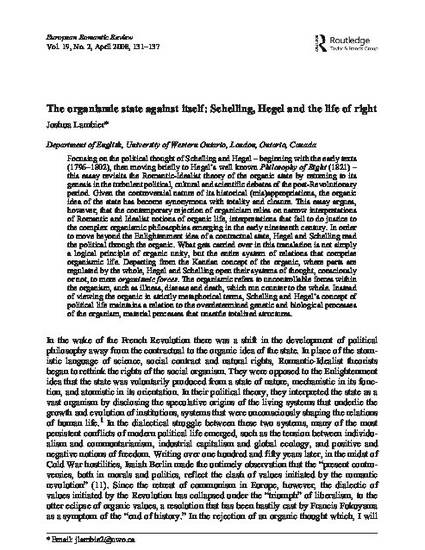 Article
The organismic state against itself: Schelling, Hegel and the life of right
European Romantic Review (2008)
Download Find in your library
Abstract

Focusing on the political thought of Schelling and Hegel – beginning with the early texts (1796–1802), then moving briefly to Hegel’s well known Philosophy of Right (1821) – this essay revisits the Romantic-Idealist theory of the organic state by returning to its genesis in the turbulent political, cultural and scientific debates of the post-Revolutionary period. Given the controversial nature of its historical (mis)appropriations, the organic idea of the state has become synonymous with totality and closure. This essay argues, however, that the contemporary rejection of organicism relies on narrow interpretations of Romantic and Idealist notions of organic life, interpretations that fail to do justice to the complex organismic philosophies emerging in the early nineteenth century. In order to move beyond the Enlightenment idea of a contractual state, Hegel and Schelling read the political through the organic. What gets carried over in this translation is not simply a logical principle of organic unity, but the entire system of relations that comprise organismic life. Departing from the Kantian concept of the organic, where parts are regulated by the whole, Hegel and Schelling open their systems of thought, consciously or not, to more organismic forces. The organismic refers to uncontrollable forces within the organism, such as illness, disease and death, which run counter to the whole. Instead of viewing the organic in strictly metaphorical terms, Schelling and Hegel’s concept of political life maintains a relation to the overdetermined genetic and biological processes of the organism, material processes that unsettle totalized structures.