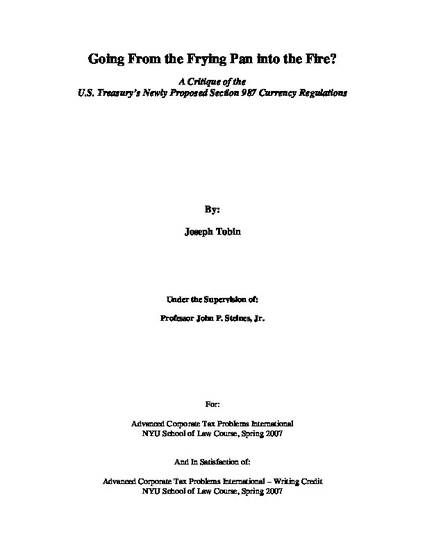 In September 2006, the IRS proposed new regulations for taxation of currency gains and losses for U.S. corporations' foreign branches. The IRS has announced that it would like to finalize them as soon as possible, perhaps as early as the summer of 2008. The new regulations withdraw the old section 987 regulations of 1991. The IRS believes these new regulations are necessary in order to prevent taxpayers from taking "artificial" currency losses on assets such as land and machinery -- assets which do not vary with the exchange rate, according to the IRS. The new regulations propose to stop these perceived abuses by limiting currency gains and losses to "marked assets," such as a foreign currency itself, or financial instruments that are directly tied to a foreign currency. Under

these new regulations, taxpayers would not be allowed to recognize currency gain or loss with respect to "historic assets", such as land and machinery. Accordingly, taxpayers will have to use the historic exchange rate at which they acquired such assets for depreciation purposes.

The regulations have already generated a significant amount of opposition by taxpayers. The Tax Executives Institute (TEI) and the American Institute of Certified Public Accountants (AICPA) have already issued comments in February 2007 and April 2007, respectively, that are highly critical of the IRS's entire approach in the new regulations. In this paper, I argue that newly proposed currency regulations are fundamentally flawed in four different ways.

First, the new regulations will impose a significant compliance burden on taxpayers because taxpayers do not keep track of the historic exchange rate at

which they acquire "historic assets", as doing so is not required by GAAP. Taxpayers will have to expend a significant amount of time, money, and effort in order to locate all of the historic exchange rates for all of their current assets; and, furthermore, will have to hire software companies to create a software program for them to track such assets in the future.

Second, the new regulations adopt an accounting method, the "net worth method", that Congress explicitly rejected in favor of the "profit and loss method", which is implemented in the 1991 proposed regulations on section 987. The legislative history of the Tax Reform Act of 1986 could not be more explicit. Congress notes in its explanation of the new currency provisions that it does not want U.S. corporations on the "net worth method" because it would put too great of a burden on US corporations to keep track of all of the historic exchange rates on an asset by asset basis. Yet the IRS has completely disregarded this legislative history and has now required that US corporations do just that in the 2006 proposed regulations on section 987.

These first two objections have already been noted by the AICPA and the TEI in their comments on the new regulations. Hence, my paper only addresses them briefly. The main argument in my paper is concentrated on my third and fourth objections to the newly proposed regulations.

My fourth and main objection to the newly proposed regulations is that they are based upon a very dubious distinction between "marked assets" and "historic assets." The IRS maintains that while "marked assets" vary with the foreign exchange rate (and are thus entitled to currency gains and losses), "historic assets" do not vary with the exchange rate (and are thus not entitled to currency gains and losses. In this paper, I analyze this assumption in the light of empirical data and macroeconomic theories in order to determine whether it is empirically valid and theoretically sound. I conclude that it is neither. Significant amounts of empirical data indicate that the value of historic assets like real estate and buildings do in fact vary with the exchange rate -- sometimes by affecting it, and sometimes by being affected by it.