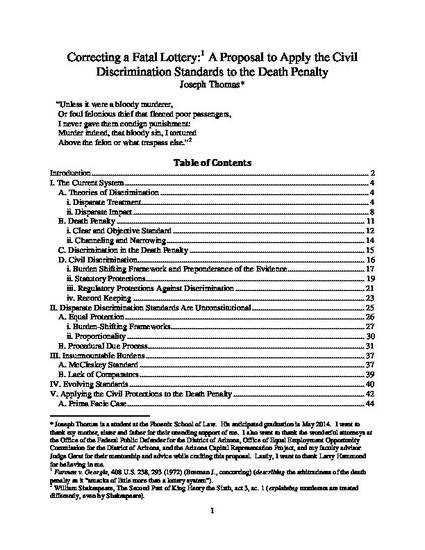 Unpublished Paper
Correcting a Fatal Lottery: A Proposal to Apply the Civil Discrimination Standards to the Death Penalty
(2013)
Download
Abstract

Death is different as a punishment. But does discrimination change from context to context? That is the message courts send when discrimination is judged differently based on the context, despite the United States Supreme Court’s “insistence that capital punishment be imposed fairly, and with reasonable consistency, or not at all.” No equivalent safeguards exist in criminal law outside of jury venire to protect against discrimination as there are in civil law. Congress and state legislatures have tried to pass legislation often called “Racial Justice Acts” to provide additional safeguards with little to no success. With the legislature’s lack of success in addressing the problem, the only opportunity to address discrimination claims may be judicially.