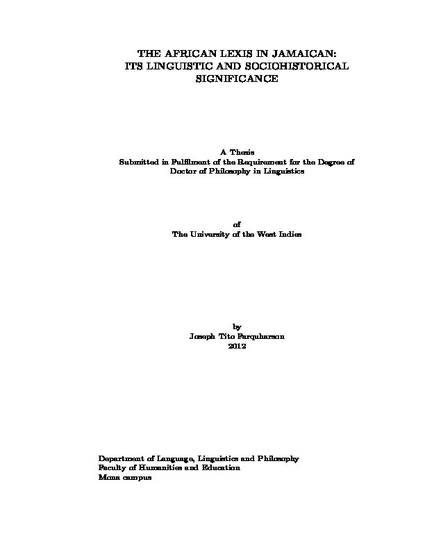 Other
The African Lexis in Jamaican: Its Linguistic and Sociohistorical Significance
(2012)
Download
Abstract

This thesis presents a fresh and comprehensive treatment of the putative lexical Africanisms in Jamaican with a view to assessing the volume and nature of this aspect of the grammar of Jamaican.

The work draws on a set of best practices in the field of etymology and outlines a set of transparent guidelines for assigning etyma. These guidelines are put to work by conducting careful etymological analyses of the over 500 putative Africanisms that have been identified for Jamaican. The analyses produce a list of 289 words whose African etymologies have been fairly well established. An entire chapter is devoted to surveying the distribution of these 289 secure Africanisms based on their source languages, time of attestation, the African region they come from, and the semantic domains to which they belong. The thesis also discusses some of the regularities observed among secure Africanisms such as the fate of noun-class prefixes, the shape of iterative words, the number of taboo words, and pejoration. A reconstruction of Àkán day-names shows that the Jamaican system shares more in common with the reconstructed system than it does with any modern version of the system used in Africa. The final substantive chapter attempts to trace substrate patterns in compounding, an exercise which turns up two potential cases of substrate influence.

The thesis assigns fewer Àkán etymologies than most previous works, and proposes that many of the Àkán words in Jamaican appear to be post-formative. On the converse, the number of Koongo etymologies has increased. This is accompanied by the fact that there is more evidence for Koongo lexical contribution to Jamaican up to the end of the eighteenth century than for Àkán.