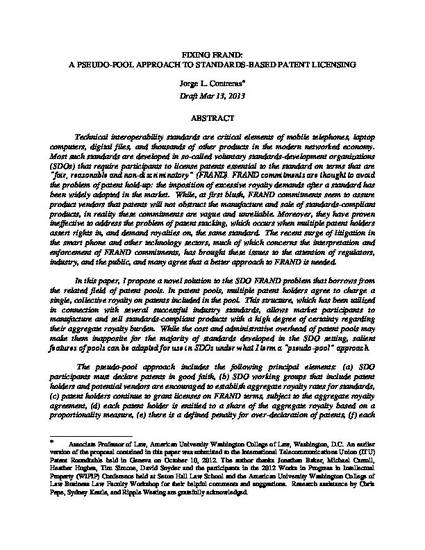 Technical interoperability standards are critical elements of mobile telephones, laptop computers, digital files, and thousands of other products in the modern networked economy. Most such standards are developed in so-called voluntary standards-development organizations (SDOs) that require participants to license patents essential to the standard on terms that are “fair, reasonable and non-discriminatory” (FRAND). FRAND commitments are thought to avoid the problem of patent hold-up: the imposition of excessive royalty demands after a standard has been widely adopted in the market. While, at first blush, FRAND commitments seem to assure product vendors that patents will not obstruct the manufacture and sale of standards-compliant products, in reality these commitments are vague and unreliable. Moreover, they have proven ineffective to address the problem of patent stacking, which occurs when multiple patent holders assert rights in, and demand royalties on, the same standard. The recent surge of litigation in the smart phone and other technology sectors, much of which concerns the interpretation and enforcement of FRAND commitments, has brought these issues to the attention of regulators, industry, and the public, and many agree that a better approach to FRAND is needed.

In this paper, I propose a novel solution to the SDO FRAND problem that borrows from the related field of patent pools. In patent pools, multiple patent holders agree to charge a single, collective royalty on patents included in the pool. This structure, which has been utilized in connection with several successful industry standards, allows market participants to manufacture and sell standards-compliant products with a high degree of certainty regarding their aggregate royalty burden. While the cost and administrative overhead of patent pools may make them inapposite for the majority of standards developed in the SDO setting, salient features of pools can be adapted for use in SDOs under what I term a “pseudo-pool” approach.

The pseudo-pool approach includes the following principal elements: (a) SDO participants must declare patents in good faith, (b) SDO working groups that include patent holders and potential vendors are encouraged to establish aggregate royalty rates for standards, (c) patent holders continue to grant licenses on FRAND terms, subject to the aggregate royalty agreement, (d) each patent holder is entitled to a share of the aggregate royalty based on a proportionality measure, (e) there is a defined penalty for over-declaration of patents, (f) each patent holder is permitted to license its patents independently of the pseudo-pooling arrangement, and (g) patent holders can opt out of the collective royalty structure if they so choose. This proposal encourages joint negotiation of royalty rates prior to lock-in of a standard, conduct that has been viewed with approval by several regulatory agencies and acknowledged as offering various procompetitive benefits. It is hoped that the proposed structure will eliminate the current uncertainty surrounding royalty levels on standardized products, while at the same time addressing the related issue of patent royalty stacking.